On September 24, 2016 at sunset, Mila Zinkova was looking west from Pacifica CA when “something strange happened,” she reports.

The sun split into multiple layers and a green flash appeared. But, that wasn’t the strange thing. Temperature inversions above the ocean surface frequently distort the setting sun off the California coast, reports Spaceweather. 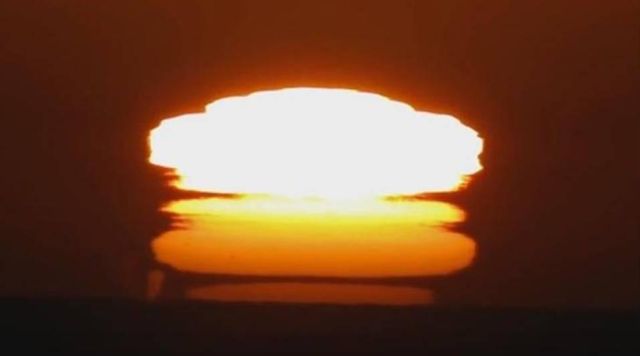 Mila: “I sent the footage to Andrew. T. Young from the San Diego State University and here’s what he writes:

I think there are at least three ducts. The different levels at which there are intermittent green beads that come and go, especially toward the end of the video.

The highest and lowest of these coincide with discontinuities in sky brightness, which suggest you were looking up through a duct at that level.

All of the ducts are well above you, which make it a little difficult to make sure exactly where they all are. But notice how many multiple (although strongly compressed) images of the full Sun there are; so you certainly have a Novaya Zemlya display here.

And then you got the whale spouts, relatively near shore! This is quite a fancy show. Lots of waves on the inversions; strong asymmetries in the shape of the Sun; multiple green flashes (though not very green); and I would also note that the transient beads at the elevated ducts look very much like cloud-top flashes – so much so, that I think they help explain cloud-top flashes as caused by a duct at the capping inversion.

This seems to be the missing link in the cloud-top flash story. Maybe I should consider cloud-top flashes as an extreme case of the sub-duct flash? I should do some simulations for an observer well below a strong duct.

Andrew. T. Young’s explanation of the supposed mirage represents his own view and not necessarily those of San Diego State University or others.

Mila Zinkova witnessed a mirage a so-called ‘Novaya Zemlya Display’ or the strange phenomenon was caused by unknown forces of nature that distorted the setting sun off the California coast?