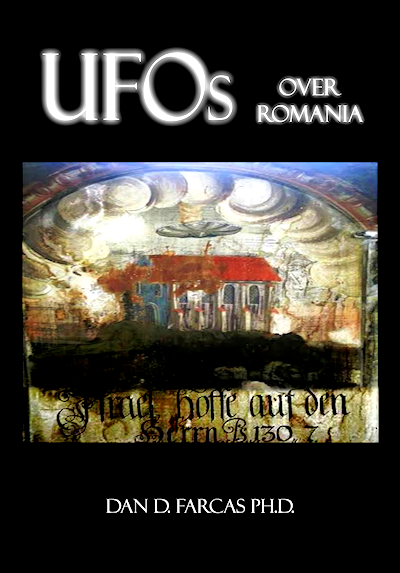 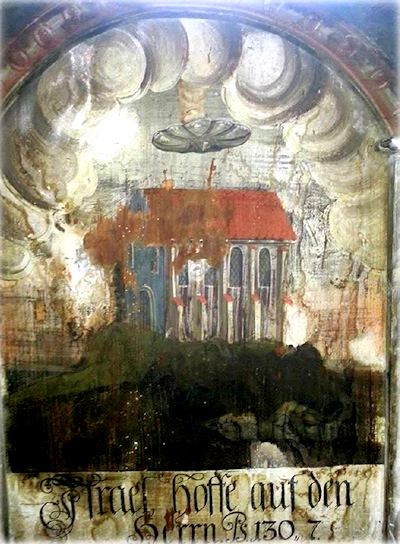 In past centuries, when, in Romania, most of the population was illiterate, religious teachings were spread and reinforced by the use of frescoes, depicting biblical scenes, covering the walls of churches both indoors and often also outdoors as well. Even if these scenes evoke ancient events and distant lands, the painters painted men and buildings as they knew them in the environment they lived. Similarly, we can assume that they sometimes painted such holy characters in heavenly vehicles that resemble certain celestial objects that they saw themselves flying in the sky (Comets, meteors etc), or that were reported by witnesses of strange airborne apparitions. In areas with Orthodox religion there are many such representations in a variety of different churches.

The city of Târgovişte was the capital of Walachia for several centuries. The construction of the Princely Church in the city was completed in 1583. The frescoes inside have not been repainted but only retouched with all of the original figures and objects remaining exactly the same. As the Romanian journalist Gabriel Tudor noted, on the west wall of the nave, the fresco depicting the moment of receiving the tablets of the Law by Moses on Mount Sinai (the ten commandments), we see a character not mentioned in the Bible: depicted as an angel and placed between two concentric circles, looking as if it had just come out to watch the proceedings. What are those two circles? In any case, surely not clouds which are clearly represented in the nearby paintings in a completely different manner. Also they can not be stars or the moon, because on the same fresco the sun is seen, whose rays are prominently depicted to draw attention that the scene takes place in broad daylight. Could it be that the two circles are a graphic representation, in a primitive manner, of a disc-shaped UFO with a domed top, which the anonymous painter, having not a very good capacity to represent things in a three-dimensional perspective, drew as a circle inside another circle?

The writer and researcher of mythology Victor Kernbach (1923-1995), in his book “Enigmele miturilor astrale” (Riddles of astral myths), detailed that similar frescoes have been in churches from Bucharest as the (old) “Saint Spiridon” and “Bucur”. Unfortunately, the first was demolished under the communist regime, but the second exists today and the pictorial representations are of the same type as those at the Princely Church of Târgovişte.

As the Romania author Călin Turcu (1942-2006) noted in his book “Extratereștrii în România” (Aliens in Romania), “On the walls of the chapel Lainici (Gorj County) can be distinguished a picture quite different from the others. The drawing, done in the early seventeenth century and representing the “Annunciation”, depicts, above the Archangel Gabriel and the Virgin Mary, a heavenly “vehicle” with the shape of a double balloon which again can not be a cloud. The flying object ends with a narrow open tube, where red streaks appear to burst and absorbed behind by a red cloud.

On the walls of Tutana monastery (Argeş county), built in 1577, is depicted an “astronaut”, equipped for space flight. It is by no means an earthly character. Images such as those presented above are reported not only in Romania but also in other countries of the Orthodox faith, as in the Decani monastery in Kosovo and on a number of Russian religious icons.

But the paintings with UFOs are not restricted only to the Orthodox churches. One such painting exists also in a Protestant church, in the centre of Romania. Gili Schechter and Hannan Sabbath, from the Israeli Extraterrestrials and UFOs Research Association, commented in an article of a photo of a mural fresco in the Monastery Church, not far from the Clock Tower in the city of Sighişoara (Transylvania). The photo reproduced in the article was made by Cătălina Borta. Under the image is written in German, a passage from Psalm 130, 7: “Israel trust the Lord!” In the image is a large building, possibly a church, above which floats, slightly oblique, a large disc-shaped object, divided in to about 10 large sections. From the centre of the disc pointing down is a sort of spike. Above the bright object is a short column on which you see other objects that are hard to identify.

The authors could not find who did the painting, nor when. However the text can not date before Luther had translated and published, in 1534, the Bible in German. The authors also noted that the same disc hovering, diagonally divided into sectors and with the stick underneath, appears on a number of medals from the seventeenth century, probably chips used in gambling. It issued its opinion that these objects represent the cartwheel described in Ezekiel’s vision.

A similar picture exists in Liber Prodigiorum, a book, written by Julius Obsequens, a fourth-century Roman historian. But the book, which describes the unusual heavenly appearances over Rome, was printed, with engravings added, only in 1552. The authors noted some differences between Sighişoara painting and the objects on the medals; for example, these have almost all a circle of stars on the circumference, while they are not on the object depicted in Sighişoara.

Are these paintings depictions of medieval UFO sightings or do they have a much more mundane and simpler explanation ? As an academic and a UFO researcher I must admit that the images on these paintings are certainly worth a second look and we should not rule out the possibility that they do depict something that today would be described as a UFO.

Born in 1940 in Reşiţa, Romania, he holds an MSc in mathematics and physics and a Ph.D. in mathematics and computers. Since 1968, he was a project manager for several countrywide information systems, mainly in health and science management. He was elected in 1993 a full member of the Academy of Medical Sciences of Romania. Since 2011 he has been the President of the Association for the Study of Unidentified Aerospace Phenomena (ASFAN) in Romania. He has published in Romania over 25 books (on IT, philosophy of science, Extraterrestrials, UFOs etc.), more than 1,200 articles and he also has participated in numerous radio and TV debates.