Central Queensland spotted the meteor which resulted in a huge flash of light and the loud boom in the night sky.

Experts are divided over if it’s a meteor, meteorite, an asteroid, or a UFO that lit up Gladstone’s sky. 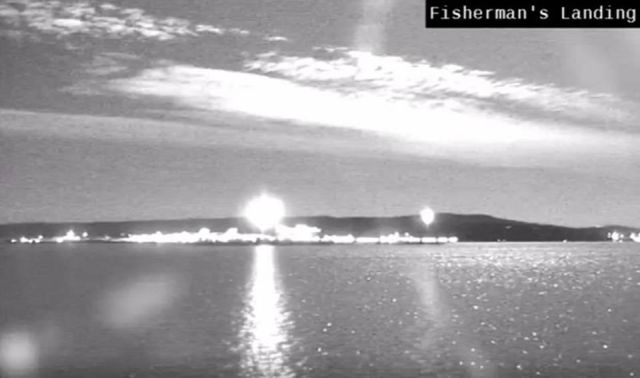 The object is believed to have crashed off-shore at Turkey Beach and Emerald in Queensland, Australia.

People in the area said the impact caused houses to tremble, with police confirming that they had received several calls in what many had thought was initially an earthquake.

Higgins Storm Chasing wrote on its Facebook: A bright flash or light has been reported by hundreds of people, this light was seen as far South as Hervey Bay and as far North as Yeppoon with a tremor being felt upon impact over the general Gladstone area and Boyne Island.

Dieter on BPEarthwatch’s YouTube channel: We live in QLD Australia and witnessed two Asteroids and not only one of them. We had two large Asteroids (one at midday) and the other one after sunset, coming from approximately 115 degrees and 110 degrees according to my marine compass.

We were spearfishing NE of Gladstone Australia (Barren Island). We could feel the pressure wave in our boat.

The asteroid after sunset (around 8:30 as we came back) made it into the mainstream news (You may want to google our local newspaper, the ” Rockhampton Bulletin” ). It was apparently the largest Asteroid Gladstone has ever seen.

7 News Central Queensland on its Facebook page: A Queensland space observer is working to figure out just what happened. Owen Benedict, of the Wappa Falls observatory, says severe tree damage could point us towards where an object has landed if, in fact something has touched down.

The Morning Bulletin in Australia: Gladstone police and astronomy experts have received hundreds of calls from residents who heard a loud boom.

The Department of Transport and Main Roads has released new footage of what is believed to be a meteor lighting up the sky in Central Queensland over night.

Videos, including the footage of The Department of Transport and Main Roads and updates on this event, follow The Morning Bulletin.

Facebook user, Ellie Thompson, uploaded footage of the huge flash of light that was captured by security cameras.