By Paul Dean, 21 September 2016
(UFOs – Documenting The Evidence, Melbourne, Australia)
Quote from the article:
“Recently, in Part 1 of this series, I discussed the discovery of US military records which comment liberally on ‘unidentified flying objects,’ usually shortened to just ‘UFOs,’ during the Vietnam War. These records, discovered by myself and Boston based research Barry Greenwood, were originally created by all four branches of the US armed forces. The sorts of records we have found include ‘Histories’ and ‘Chronologies,’ ‘Mission Reports,’ ‘Patrol Logs,’ ‘Daily Staff Journals,’ and so-called ‘Lessons Learned’ publications. Also represented in these finds are ‘Project CHECO’ publications, specific to the United States Air Force (USAF). Most of these records have come from either the Defence Technical Information Center (DTIC) or National Archives and Records Administration (NARA). This came on top of other ongoing work which dealt specifically with unresolved questions around the USAF’s accidental strike on Australia’s warship, the HMAS Hobart. Part 1 and Part 2 of that work is complete, and there will be a third installment at some point in the future.
One of the issues I have raised is a question of terminology. It should easy to write off the term ‘UFO’ as some sort of lazy ‘catchall’ for unknown, unidentifiable aircraft. Helicopters, especially seen at a distance, or only briefly plotted on primary radar, would have fallen into the the ‘UFO’ category. However, the problem is rather more complex than that. Time and time again in official military documents we have seen the term ‘UFO’ being alongside, or distinct from, ‘unidentified aircraft,’ ‘unknown helicopters,’ and the like. This is both inconsistent and unexpected in such a wide range of military records. Still, is it possible that these references to, and reports of, ‘UFOs’ or ‘unidentified flying objects’ in Vietnam were merely bumbling enemy helicopters and tricks of light in the jungle? Unfortunately, simple explanations fail to solve the issue to my satisfaction.
Though not found by either Barry Greenwood or myself, it is worth taking a look at a 17th of April, 1967 UFO report made by US Army Specialist (SP4) Robert M. Harkinson who was assigned to Headquarters, 524th Military Intelligence Detachment, Saigon.” 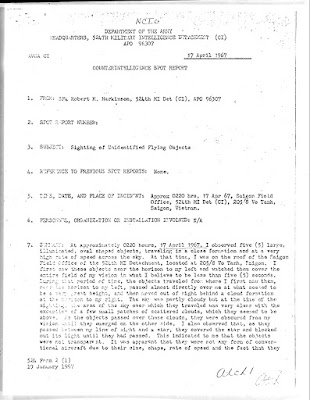