Witness report: We were in the first fifteen or twenty minutes of driving into the Joshua Tree National Park before we approached a medium sized formation and got the urge to pull over.

I started filming the landscape and panned to the right, and stopped. Right before I start to pan back to the left, if you look at the ground in front of the left leaning Joshua Tree, in the foreground, you’ll see a puff of dust come from the ground before a small object shoots upwards and to the right. 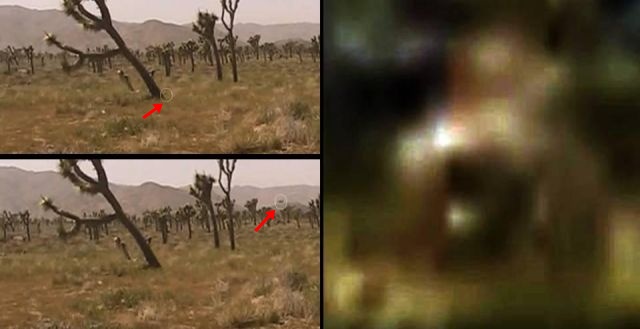 Image above: UFO shoots upwards and to the right – Tiny alien in front of the UFO?

The object seems to project suddenly off the right and upwards, rotating clockwise, with the corners of the object lighting up. By the time it gets to the trees it changes form and looks more like a blip or small cylinder.
The witness searched extensively for birds that can take off “that fast” from a standstill and was unable to find anything at all.

Even peregrine falcons, birds that can fly up to 240 miles per hour, only get that fast from a dive starting well above the ground. When watching it or any bird take off, you can see wings pushing against air and gravity to begin the flight…and its “slow”…extremely slow, in comparison to the speed at which this object is taking off. So it is not a bird by any means.

The witness who filmed the sighting in 2011 was very curious to know what might have been the object, so he decided to edit the relatively small object as can be seen at the beginning of the video.

If you look closely at the slow version of this edit, it looks like a tiny creature standing in front of a small probe which of course does not necessarily mean that it is indeed a UFO piloted by a tiny alien, however given the fact that this object can take off “that fast” from a standstill and disappears in a split second we may wonder whether it is something super natural or not.