Witness report: On September 28, 2016 I caught an extraordinary UFO sighting. I was watching an odd looking light crossing the sky at variable speeds around my house, during the sunset.

To me it was just some sort of helicopter, or maybe a drone. But after 5 or 10 minutes, I began suspecting the object not to be man-made. 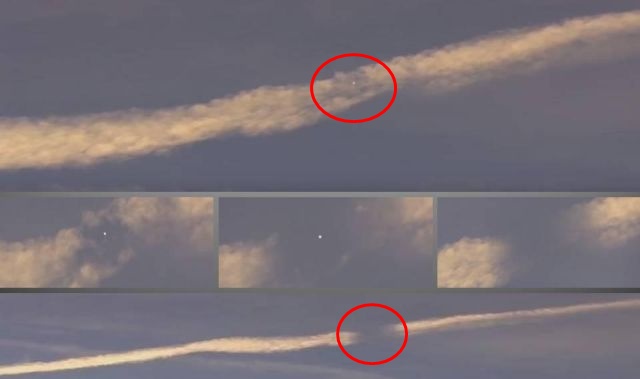 It was performing weird maneuvers, accelerating and decelerating randomly. When the light started to accelerate towards a huge Chemtrail, I took my camcorder and tried to find it in the distance.

The object stopped in front of the Chemtrail, and slowly destroyed it. Indeed, the trail was being “consumed” progressively. I was simply speechless. I still can’t believe what I caught. The Chemtrail got literally perforated.

I can’t be 100% sure it’s due to the object itself, but I’m sure there’s a link between it and the Chemtrail.

Such a huge trail can’t just disappear like that, for no reason! And only a small portion of the trail gets erased, justly around the object.

After the UFO attacked the trail, it moved backwards and flied West, in my opposite direction. It disappeared pretty quickly.

What was that object? Man-made prototype to delete Chemtrails? Some extra-terrestrial technology made to protect us? I just don’t have a clue of what this is.