Unedited witness statement: We were actually on holiday away from home when we caught this UFO on our surveillance camera at home.

We noticed the following morning that we had captured something strange. We cannot find anyone else at this moment in time who saw it too but to record it on video I think is very lucky. 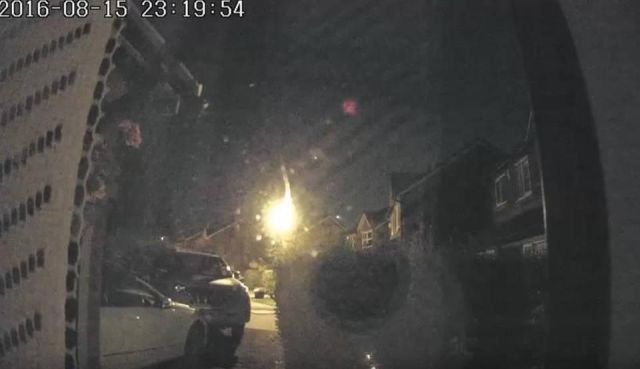 On the video it has recorded the date and time. On the video after our security light comes on and then goes off a few seconds later, above the neighbors houses but further away a light appears to the center of the screen.

This light seems to have a trail after it. We thought we were watching a meteor at first but realizing it was quite big and not straight up in the sky, it would have to be pretty close to the earth if it was.

Also, the light changes direction, it actually turns around and comes a little closer as it goes back to the same direction it came from.

The light comes into view in the center of the screen and moves left, when it turns around it slightly disappears behind a tree but can still be seen.

When it comes back it seems to come closer and moves off to the right and in the same direction it came from. I feel as it was moving over some water to the outskirts of our village.

Witness media release agreement to show this video is on file with the Mutual UFO Network (MUFON) – Case 79014.