Great balls of fire! The Hubble Space Telescope has detected superhot blobs of gas, each twice as massive as the planet Mars, being ejected near a dying star.

The plasma balls are zooming so fast through space that they would travel from Earth to the moon in 30 minutes. 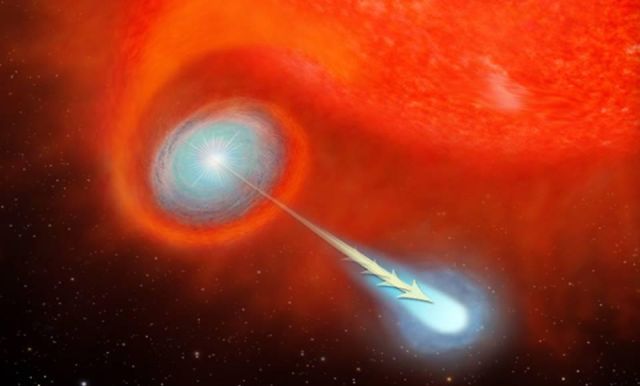 This stellar “cannon fire” has continued once every 8.5 years for at least the past 400 years, astronomers estimate.

The fireballs present a puzzle to astronomers because the ejected material could not have been shot out by the host star, called V Hydrae. The star is a bloated red giant, residing 1,200 light-years away, which has probably shed at least half of its mass into space during its death throes.

The current best explanation is that the plasma balls were launched by an unseen companion star in an elliptical orbit around the red giant. The elongated orbit carries the companion every 8.5 years to within the puffed-up atmosphere of V Hydrae, where it gobbles up material from the bloated star.

This material then settles into a disk around the companion, and serves as the launching pad for blobs of plasma, which travel at roughly a half-million miles per hour.

This star system could explain a dazzling variety of glowing shapes uncovered by Hubble that are seen around dying stars, called planetary nebulae, researchers said to newscenter:. http://hubblesite.org/newscenter/archive/releases/2016/34/ 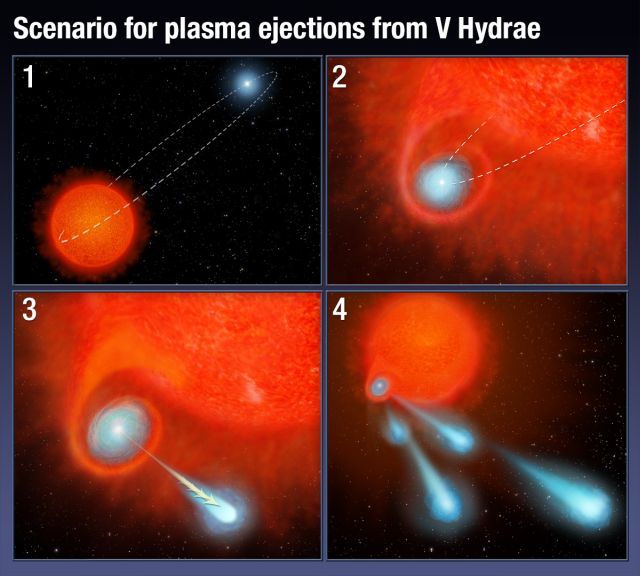 This four-panel graphic illustrates how the binary-star system V Hydrae is launching balls of plasma into space.

Panel 1 shows the two stars orbiting each other. One of the stars is nearing the end of its life and has swelled in size, becoming a red giant.

In panel 2, the smaller star’s orbit carries the star into the red giant’s expanded atmosphere. As the star moves through the atmosphere, it gobbles up material from the red giant, which settles into a disk around the star.

The buildup of material reaches a tipping point and is eventually ejected as blobs of hot plasma along the star’s spin axis, shown in panel 3.

This ejection process is repeated every eight years, the time it takes for the orbiting star to make another pass through the bloated red giant’s envelope, shown in panel 4.