This is a next level HD Real Time video capture, filming 30 frames per second at 1/60th of a second shutter speed at 102400 ISO using Nikon D4S imaging technology which is a major change from Time Lapse photography in filming real time (actual action) footage. 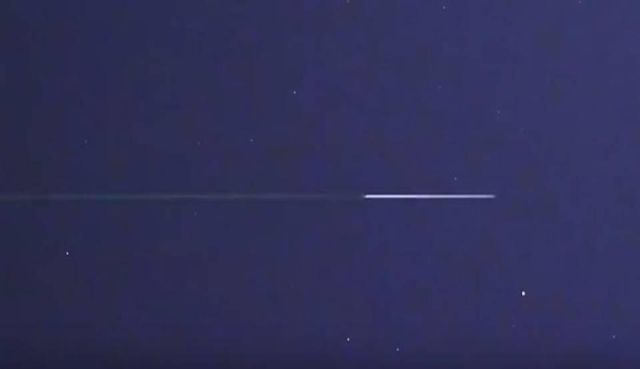 What appears and moves through the frame with controlled velocity, is not a meteor. There are several other instances of this event recorded in time lapse, which indicate this is far from a shooting star or meteor.

The object is to film and freeze action in no light conditions (night time darkness) and it illustrates the point that what’s imaged is not meteor related but now defined as a UFO at WARP.

The probabilities that meteors enter and exit any given airspace should cast reasonable doubt on the theory of meteors!

Editor’s Note: The American Meteor Society notes that there has been a dramatic increase in fireball/meteor activity since the beginning of 2016 but nobody knows why, but suppose Wilbur Allen, the author of the video, has right that most of the meteors or meteorites are actually UFOs at WARP then you can ask yourself what is the purpose of the significant increase of UFO activity in our skies.

Below video shows the event, in its entirety, in Real Time. The purpose is to absorb the sound emitted by the UFO Band of Light, as it went to WARP (Leaving our realm). Sounds vanish as the anomaly disappears.