Canadian astrophysicists have discovered 234 cases of what they call “peculiar periodic spectral modulations in a small fraction of solar type stars,“ which translates as variations in the light-pattern of 234 stars more or less similar to our own sun. Even after examining a wide range of possible technical and astrophysical  explanations, the scientists are left with the hypothesis, even if still speculative in nature, that the signals are caused by light pulses generated by Extraterrestrial Intelligence (ETI) to makes us aware of their existence. 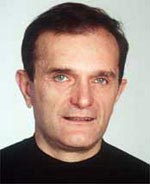 As Prof. Ermanno F. Borra and Eric Trottier of the Université Laval in Québec report in a preprint-paper via ArXiv.org, their new discoveries match exactly with a modulated signal that Prof. Borra described and simulated already in a paper published in 2012. In that paper, he described how intelligent signals could be hidden but also discovered in already available data-sets of sky surveys.

As Prof. Borra explains to Grenzwissenschaft-Aktuell.de (GreWi): “The paper discusses the results of an analysis of 2.5 million spectra of astronomical objects. A spectrum gives, in great details, the measurement of the intensity of light as a function of color.”

This work was carried out to detect periodic signals in their spectra generated by Extraterrestrial Intelligence (ETI). The periodic signal predicted in a previous scientific publication was found in only 234 stars that are overwhelmingly similar to the sun (but neither in galaxies nor quasars).

A detailed statistical analysis in the paper definitely shows that the signals cannot be caused by instrumental or data analysis effects. Several other possible physical causes of the signals are also considered, but quantitative analyses show that they cannot generate the signals.

Because the detected signals have exactly the shape of an ETI signal predicted in a scientific publication (2012), they are therefore in agreement with the ETI hypothesis. The ETI hypothesis is strengthened by the fact that the signals were detected in only a small fraction of stars that have spectral types (colors) in a narrow spectral range centered on the spectral type of the sun. On the other hand, the ETI hypothesis is so peculiar that, at this stage, it cannot be accepted as certain. It absolutely has to be confirmed, or denied, by more observations.

Fourier modulus of the frequency spectrum (after subtraction of its smoothed spectrum) of an F5 star that has a statistically significant signal.
(Credit: Borra u. Trottier, 2016)

According to the authors, so far the only other explanation, alternatively to the ETI-hypothesis, is the idea that “the signals are due to highly peculiar chemical compositions in a small fraction of galactic halo stars.”

Beside the fact that Borra and Trottier could not find a technical or astrophysical explanation for the discovered signals, the signals also match exactly with the one suggested, and simulated, by Borra in 2012 when he suggested to look for exactly that kind of signals hidden in already available data of large sky surveys like the Sloan Digital Sky Survey (SDSS).

In 2012 Prof. Borra simulated an initially invisibly modulated spectrum of a star (l.) in which an embedded signal becomes recognizable after a fourir transform analysis (r.). (Credit: Ermanno F. Borra, 2012)

In 2012, Prof. Borra simulated an initially invisibly modulated spectrum of a star (l.) in which an embedded signal becomes recognizable after a fourir transform analysis (r.).

Such strong light signals could be sent, for example, with powerful lasers that get modulated in such a way that they get embedded in the light spectrum of a star as a pattern that could very well be discovered and recognized as such by an intelligent observer.

They continue, “The ETI hypothesis requires that all different ETI transmitters choose to broadcast with the same time separation of pulses and one may wonder why they do so. This is a highly speculative issue that may have several explanations. A possible explanation that makes sense is that all ETI use the same time separation to make it clear that the pulses all come from ETI.“ 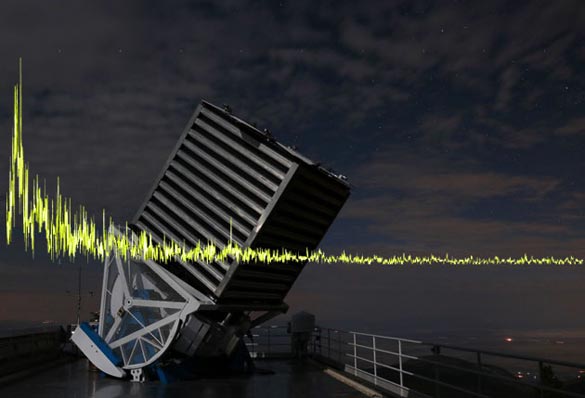 The Telescope of the Sloan Digital Sky Survey with one of the 234 detected Signals. (Credit: SDSS.org / Borra u. Trottier, 2016)

Concluding their paper, Borra and Trottier emphasize that at this stage, the ETI generation of the spectral modulation is still a hypothesis that needs to be confirmed with further work.

They suggest that this can be done by repeatedly observing the described stars with photoelectric detectors capable of detecting very rapid intensity signals.

According to Borra, he has already contacted SETI-astronomers who seemed very interested to do a follow-up.

Borra says, “Now I am waiting for the other astronomers actions and help them.“

Posted with permission from www.grenzwissenschaft-aktuell.de.