The now-retired controllers say they tracked a bona fide UFO that covered 120 miles in eight seconds, or two sweeps of their radar beam! If that were not stunning enough, Carey says the object also made an instantaneous right-angle turn as it left the vicinity. For his part, Barker says he actually saw the amazing interloper as it briefly hovered near the air traffic control tower, describing it as an orange sphere with a series of portholes positioned around its center. 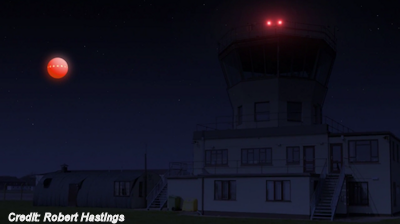 Both controllers are emphatic: This was an intelligently-controlled craft whose capabilities far surpassed any current human technology. Significantly, the incident occurred the same night that USAF Lt. Col. Charles Halt—the Deputy Base Commander at Bentwaters—was leading a small group of Security Policemen through nearby Rendlesham Forest, to investigate strange lights that had been reported there. At one point, Halt described seeing an object resembling an eyeball moving through the trees, dripping a molten-metal-like substance. 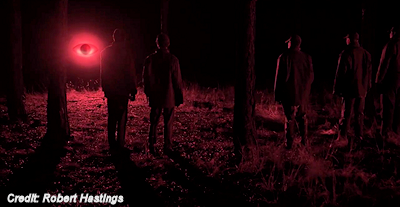 Skeptics have always dismissed this “UFO sighting” as a misreported observation of the sweeping beam from the nearby Orford Ness lighthouse—despite the fact that Col. Halt has repeatedly said, as early as 1997, that the lighthouse beam was also visible during the incident, but located some 30-degrees away from the strange glowing object.

According to Halt, the eyeball eventually “exploded” and released five smaller disc-shaped craft that raced away in different directions, something confirmed by USAF Security Policeman Rick Bobo, who saw the spectacle at a distance, from the guard tower at the Bentwaters nuclear Weapons Storage Area (WSA).

After awhile, Halt says, three disc-shaped craft higher in the sky were observed doing grid search-like maneuvers. One of them approached his team, hovered above it, and directed a laser-like beam at their feet. After a few seconds, the beam clicked off and the object moved away, in the direction of the WSA. Seconds later, Halt heard excited radio chatter from guards posted at the facility, indicating that beams from the UFO were falling on or near the tactical nuclear bomb storage bunkers! 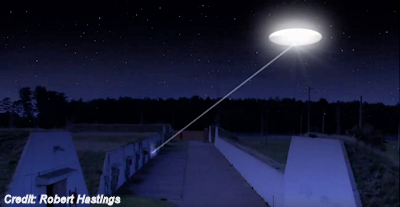 It should be noted that the late Georgina Bruni, while researching the Rendlesham Forest UFO incidents, interviewed a former British military radar operator at RAF Watton, Nigel Kerr, who admitted that an anomalous aerial object had briefly appeared on his screen—for three or four sweeps—the night that Lt. Col. Halt and his team were in the woods.

Now that the USAF air traffic controllers’ extensive, detailed testimony is also on the record, we can confidently assert that at least one genuine UFO—a high-velocity, maneuvering, hovering, spherical-shaped craft exhibiting advanced technology—was in the vicinity during the period that Halt described seeing multiple UFOs in the sky.

Nevertheless, questions remain: Why was only one UFO tracked on radar—both at Bentwaters and Watton—when multiple objects were sighted by USAF personnel on the ground? Were all but one of the craft operating in a

Stealth-like mode? Or does this discrepancy relate to a given object’s altitude, with most of the UFOs maneuvering beneath the radars’ lower detectability-limit? And why did some observers (Halt and his team) observe discs while others (controller Ike Barker and one guard at the WSA, Charlie Waters) report spherical craft?
Regardless, the relevant facts—including a detailed summary of the stunning incident at the WSA—are discussed in my video. Additionally, a far more comprehensive assessment of the entire Rendlesham Forest Case is featured in my book, UFOs and Nukes: Extraordinary Encounters at Nuclear Weapons Sites, available only at my website.
VISIT ROBERT’s SITE ►

One UFO at RAF Bentwaters Appeared on Radar: