A California witness at Grass Valley reported watching as many as 14 UFOs overhead in a rural area during an encounter where the objects appeared to be searching for something in a nearby wooded area, according to testimony in Case 79639 from the Mutual UFO Network (MUFON) witness reporting database.

The events played out during the early morning of September 26, 2016, when the witness received a call from a friend who needed to be “rescued” from a domestic violence situation along an old logging road named Jones Ridge Road near Grass Valley.

The witness had car trouble along a rural roadway and found that the sounds of nature had stopped. (Credit: Google)

“I found her sitting on the road in complete darkness,” the witness stated.“I picked her up and continued down Jones Ridge to try and reach the other end that comes out close to my home – about two miles down Jones Ridge.”

But the witness encountered car problems.

“I high centered my car and busted a fuel line and all my gas drained out and we were now stuck in the middle of deep forest in complete blackness in the middle of nowhere. I began trying to patch the fuel line. I did not have anything to do this with so I tried to ‘MacGuvyer’ it with a maxi-pad, string and a zip-tie.”

The witness then realized something odd was happening.

“So I was on my back on the ground attempting this repair and the first thing I noticed was there was zero noises coming from the woods. No crickets, frogs, crunching leaves – nothing. If you know the forest, that does not happen – ever.”

The witness then decided to review the surroundings.

“When I noticed there were no sounds coming from the woods, I pulled my head out from under my car looking straight up. That’s when I saw the first two of them. They were straight up above us very high up – I’d say about 3,000 – 4,000 feet hovering and moving slightly back and forth and up and down, but maintaining their position.”

The witness became immediately excited and stood up, covered in red clay dust from the ground.

“I called to ‘G’, my friend, to come out of the car and look. She did so and became very upset and started to cry and become hysterical. I hugged her and gave her my best ‘not all aliens are bad’ speech. She began screaming, ‘We have to get out of here.They are going to abduct me.’ I told her to please keep her voice down and that we couldn’t leave because of the busted fuel line. She calmed down a bit and that’s when we saw the others.” 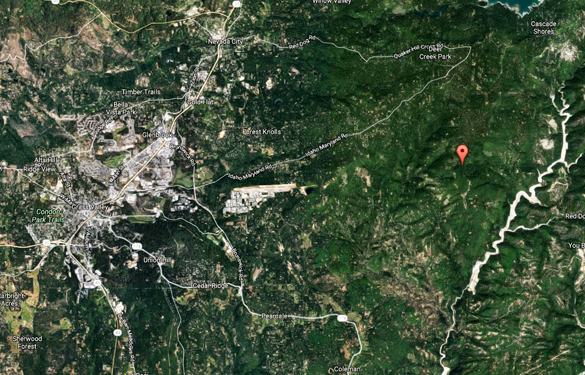 The witness soon noticed that multiple objects were near ground level appearing to be searching for something in the nearby woods. (Credit: Google)

The witness then realized there were more objects.

The witness then decided to explore the lights with a flash light.

“I asked ‘G’ to hand me the mag light because I wanted to blink it at the two hovering objects to see if I could get a response (big mistake). ‘G’ objected and began to cry again. I should have listened. She handed me the light and I began slowly flashing the two bosses (what they seemed to be) above us. The blinking provided no response, so I held the beam steady on one of them.”

The objects appeared to react to the light.

“That’s when things got a bit ‘hairy.’ When the solid beam hit the one craft, it stopped moving completely as well as the one next to it a stood completely still in the sky. While I was looking up, ‘G’ began to scream, ‘Oh my god, oh my god, they’re coming.’ I looked down and over to where she was pointing into the woods. All 12 of the craft in the woods had stopped their search and were rushing down the hill, weaving in and out of the trees directly for us.”

Thinking that the light had upset the objects, the witness quickly shut it off.

“The lights that were coming toward us all froze at once – holding in place as if awaiting orders. They froze for approximately a minute, and then turned around and continued their search of the woods. We watched them for about a half hour. I tried to film them with my phone, but kept getting an error message that the phone was malfunctioning.”

The witness recalled an unusual event on the way to pick up the friend.

“When I was on my way out of Jones Ridge to get ‘G’ I had my stereo on running on a flash drive and it kept going in and out with static. I thought this very strange because it wasn’t the radio – it was a flash drive and not dependent on a signal.”

The witness finally got the vehicle running again.

“I got the patch to hold and had enough gas in the lines to start the car. We left the lights to their business and headed down the road. We got three or four miles away when the gas ran out and we slept in the car in the middle of the road until the next morning when my buddy ‘J’ came out with gas and a proper patch.”

The witness believes there were other witnesses at other locations who saw the same lights.

“The next night I was online and saw to my amazement that our lights were part of a huge squadron-like group that was featured on mainstream media – NBC KCRA Channel 3, Sacramento at 7:56 – the same night of our encounter only just earlier. They were spotted above Rocklin/Roseville in a huge ‘C’ formation heading east right towards ‘G’ and me.”

California MUFON Assistant State Director Devlin Rugne is investigating. Please remember that most UFO sightings can be explained as something natural or man-made. The above quotes were edited for clarity. Please report UFO activity to MUFON.com.