By Paul Dean, 7 November 2016
(UFOs – Documenting The Evidence, Melbourne, Australia)
Quote from the article:
“In Part 5 and Part 6 of this series, I discussed the US military and intelligence community’s responses and concerns regarding a series of provocative UFO events which occurred in the mid–1970’s over United States Air Force (USAF) bases which were assigned to the Strategic Air Command (SAC). Previously, in Part 1, Part 2 and Part 3, I looked the US military’s OPREP–3 reporting system which was one of the methods used to alert top–level military commands and components of these, to put it mildly, unusual events. In Part 4, I highlighted a special category of OPREP–3 reporting which was explicitly designed for the North American Aerospace Defence Command (NORAD) and Aerospace Defence Command (ADCOM), to report general unknown radar tracks, and, ‘Unidentified Flying Objects – UFOs.’ In summary, what started out as a dialogue about UFO’s being reported by the OPREP–3 reporting system, has expanded into a much wider appraisal of myriad declassified documents which deal with UFO case investigation, evaluation and high level concern long after the US government apparently gave up on the UFO issue.
In this Part 7, I will continue to focus on declassified records released by the Joint Chiefs of Staff (JCS) and the National Military Command Center (NMCC). The release of these records came about due to the once–powerful Freedom of Information Act (FOIA), or, rather, its implementation by researchers Barry Greenwood, Robert Todd, Lawrence Fawcett, Todd Zechel and others.” 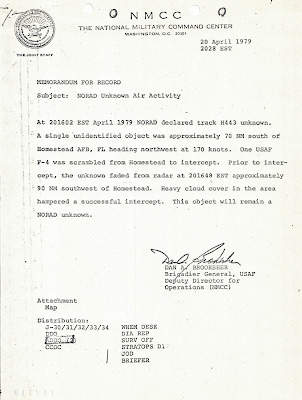