By Kevin D. Randle, 3 November 2016
(A Different Perspective, Cedar Rapids, Iowa)
Quote from the article:
“This week I had the opportunity of interview former Air Force officer Carmon Marano who had been on the staff of Project Blue Book. How do I know? First, Ben Moss sent me a picture that showed the Blue Book Staff and he is the lieutenant standing, more or less, behind Hector Quintanilla. Second, in reviewing the UFO sightings from Minot Air Force Base in 1968 I found a number of memos for the record that he had written. Finally, of course, he said exactly that and unlike so many others who have said they were part of Blue Book, we can actually prove it with him.” 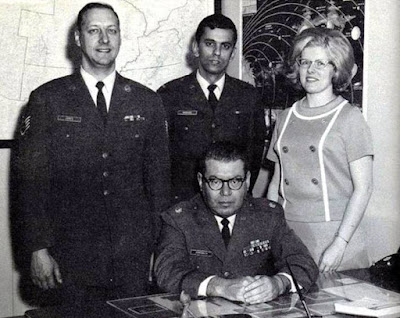