A 1000 years old map shows more land beyond the Antarctica Edge. The map has been found in the Hawaiian Gazette, Friday, January 11, 1907.

This map is very interesting because it is very similar to the Boston Map except it shows much more land which is not visible on the Boston Map or on other world maps. 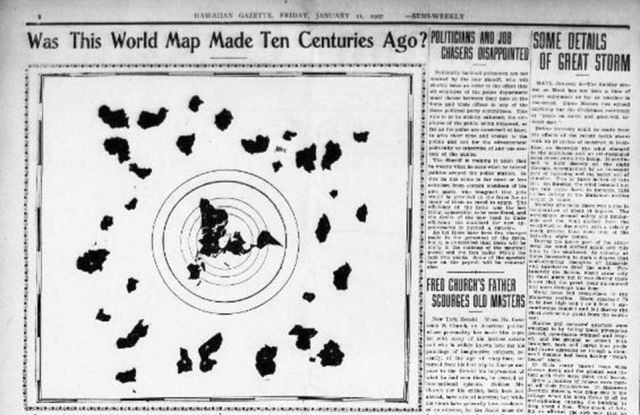 Extract from the 1907 article: Stranger almost than the “Manuscript found in a copper Cylinder” is the copy of a map which came across seas to Honolulu from a Buddhist Temple in the mountains of central Japan.

It is a map of the world made 1000 years ago. Dr. Kobayashi, the well-known Japanese physician and surgeon of Honolulu has received a copy of the map, which he believes to have been made by Chinese priests ten centuries ago.

The map is drawn on the principle of the Mercator Projection showing the North Pole as the center of a circle in which are the continents of North and South America, Europe, Africa, Asia and Australia.

The map was found by his brother in a Japanese temple in the mountains of Japan, said Dr. Kobayashi and it has been hidden from the Japanese government in modern times just as it was in ancient times, for in olden days such a map would have been destroyed by the authorities.

According to a letter the original map was brought from China by a Buddhist priest and concealed in this temple.

The original map of which a copy drawn by Dr. Kobayashi’s brother, and of which the accompanying cut is a tracing, is worm-eaten and barely holds together.

The above map with all the continents and even the Hawaiian Islands shown was evidently not made by the priests who traced the original lines.

Remember, in December 1946-1947, Admiral Richard Byrd visited Antarctica on “Operation High Jump”. On his return, he performed a few radio and TV show interviews and in his own words he said that there was a secret land mass the size of America beyond the South Pole.

Note: Even the map had been published in 1907 it could be a hoax but if this map is true it means they are hiding infinite amounts of land beyond Antarctica for the public.