Terry Johnson lived in New York City. He rode the subway, back and forth to work at two different restaurants, six days a week. One was Italian. The other was a burger joint.

He was 25 years old when he first saw a peculiar child in a subway car. The child was only three feet tall, wearing a baseball cap. The youngster wore his cap visor down, like an army soldier. Other than that, Terry thought it was a normal ten year-old… until it looked back at him. Its eyes were shiny and wet, like the eyes of a lower animal. After that the kid basically ignored him. 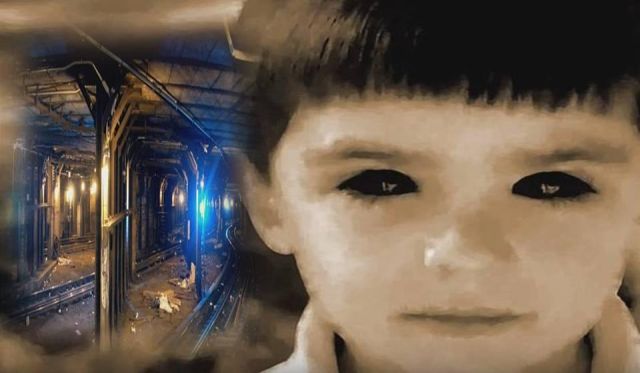 The child sat there expressionless, head straight, no matter what happened. He never turned his head. He was always on the subway in the afternoons. Terry even got used to him, and when his fear subsided he grew curious. He decided to follow the kid.

He was not stalking a child. He was observing some kind of robot. Besides, he just wanted to see where the kid got off the train. He wasn’t following it home! They both rode the metro to the end of the line, and got out of the car together. As usual the creature continued to ignore him. They waited on different benches, for the first train heading back out.

Terry soon lost both of his jobs. He was unable to concentrate. Following the baseball cap became his new profession. He would observe the child for hours, riding from one end of the city to the other. Terry never had the nerve to track the creature in the evening hours, when the subway stopped running at night.

Until chance deposited them on the opposite seats in the same car. Blank, obsidian eyes of the kid, stared straight ahead… directly at Terry, unblinking. Terry tried to stare down the kid, until subway train was being parked. It slowed to a crawl and then stopped. The end of the line for the night. Terry could see into the windows of more trains on both sides.

The child smiled at him. It said, “Can you help me, mister? I need someone to walk me home.”

Terry just sat there in a state of shock.

“I’m scared,” said the child. “I could really use your help.”

Terry could only shake his head and pray the thing would understand, that his answer was “no”.

Suddenly the small boy became very angry. “It’s your responsibility to look after me! I am helpless!”

That’s when Terry closed his eyes. He thought he heard the boy walk out of the car. When he opened his eyes again the creature was gone, and he relaxed for the first time in months. It was a half hour later when he decided to leave the car himself. But when he poked his head out of the door, there was no room to descend. All the space between the parked trains was filled with black eyed children.

Terry must have passed out, because when he woke up the subway car was pulling into a station. He didn’t care what station it was. He stepped out of the car that day, and he has never since travelled by train.

Whether the black eyed children are aliens from another planet, or demons from hades, their agenda remains unknown. But if you know of their existence, it is said you are much more likely to meet one of them in person.