By Keith Basterfield, 23 November 2016
(UFOs – scientific research, Campbelltown,
New South Wales, Australia)
Quote from the article:
“Introduction
Late on the evening of 2 November, 1957 and the early hours of the morning of 3 November, 1957 (local time), a number of individuals reported a series of incidents involving an unusual object, near the location of Levelland, Texas in the United States of America. There is much material available on the net, but I have been looking for primary material relating to the event, i.e. audio recordings of those directly involved; or written statements from those directly involved. This was to give me a better understanding of the core information, without the distortion of being written up in summary form by third parties.
Interestingly, I located no audio recordings of interviews with the actual witnesses. You might consider this normal for that era, i.e. rural Texas in 1957. However, I did locate two audio recordings made in 1957 with one of the central figures, Sheriff Weir Clem; plus, a transcript of a third interview with Sheriff Clem.  These are the closest one can get to the witnesses’ testimony, at least in audio format. I will present these three in transcript form. After which, I will present written material gathered from direct interviews between witnesses and the United States Air Force’s Project Blue Book.”
http://ufos-scientificresearch.blogspot.com/2016/11/levelland-texas-november-1957-audio.html
Related posts: 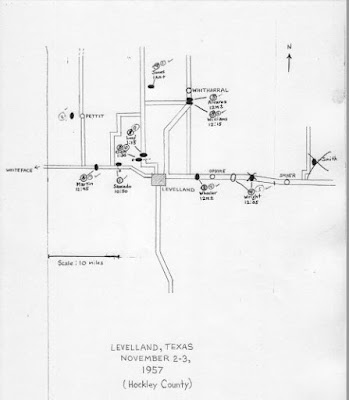