By Paul Dean, 6 December 2016
(UFOs – Documenting The Evidence, Melbourne, Australia)
Quote from the article:
“Previously, in Part 1, Part 2 and Part 3 of this series, I looked at the USmilitary’s OPREP–3 reporting system, and, in particular, its use in alerting top–echelon military commands of serious UFO incidents. During the 1970’s, the OPREP–3 system was used to convey urgent and current information regarding perceived UFO activity near a number of United States Air Force (USAF) bases assigned to the Strategic Air Command (SAC), as well as a United States Navy facility. In Part 4, I highlighted a formally classified joint North American Aerospace Defence Command (NORAD) and Aerospace Defence Command (ADCOM) manual which specifically asked that ‘unidentified flying objects – UFOs’ events be submitted by regional NORAD Commanders via the OPREP-3 system. In Part 5, Part 6 and Part 7 of this series, I moved away from the reporting of UFOs via the OPREP–3 system, and began to discuss the US government’s response, concern, evaluation and investigation of these intrusive aerial events. These alarming UFO incidents, known euphemistically as the ‘over flights,’ as well as the widespread reaction they triggered within the US government, can only be studied through the examination of begrudgingly declassified documents. The release of these records, which number in the many hundreds, only occurred due to the implementation of the Freedom of Information Act (FOIA) by a handful of dogged researchers. In particular, Robert Todd, Barry Greenwood, Lawrence Fawcett and Todd Zechel spearheaded this extraordinary and voluminous research effort, often at great cost.
In this Part 8, I will begin to look at how the North American Aerospace Defence Command (NORAD) and Aerospace Defence Command (ADCOM) assessed and responded to the apparent UFO activity during 1975. It is worth stating that I will soon discuss, at much greater length, NORAD and ADCOM’s actions in another series of blog posts I author titled ‘NORAD and the UFO Smokescreen.’ ” 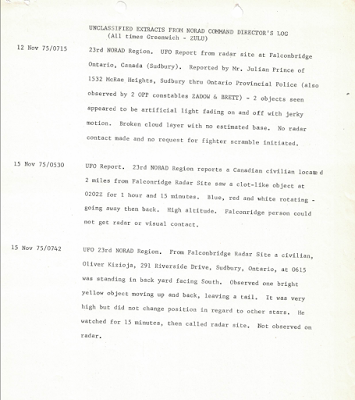 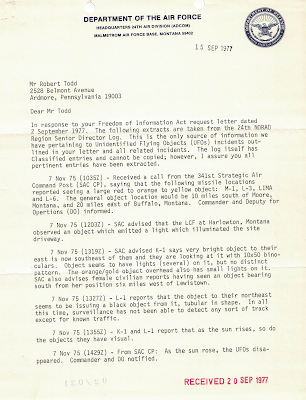