The photographer was taken images for the purpose of a mountain and moon combination scenery located in Cyprus. Although he took several images, the cigar-shaped space vehicle could only be realized in just one image right after the shooting in LCD display. (Mufon case nr. 81145 – 2016/12/25). 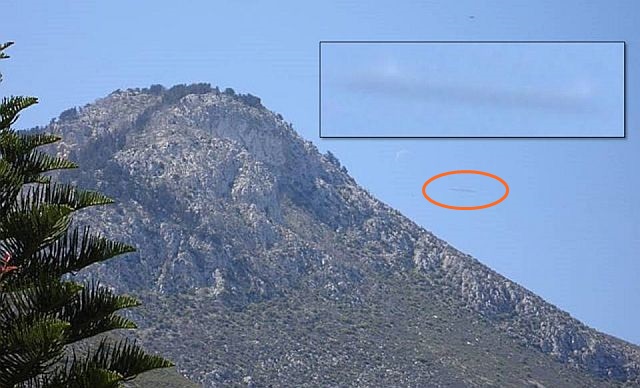 Designs for these mysterious flying objects were found among top secret papers of the Nazis at the end of WWII. Some of the engineers and scientists working on these programs were imported to America under project “Paperclip”.

These types of wingless and windowless flying objects can hover for hours then rapidly accelerate.

Subsequently these cigar-shaped objects have been often described by airline pilots and other witnesses as being metallic or silver colored.

The large sized objects, varied in length from a hundreds meters to over a kilometer, seems to confine them to higher altitudes, but the smaller ones sometimes come near the earth’s surface and are only seen when they accidental uncloaked themselves.

Although it cannot yet be proven, it is possible that the origin of these ufo’s can be traced back to the Nazi designs for these flying objects, unless it is alien.