In the years 1943-1945 the Germans had a project called Andromeda-Gerät (Andromeda Device). The Andromeda was a very large cigar-shaped spaceship. Two hangars inside the ship were special designed to hold smaller spacecraft like the Vril 1, Vril 2 or the Haunebu.

At the end of WW2 the US army discovered one of these enormous cigar-shaped ships as well as designs and specifications of the craft. The space ship and other smaller UFOs were relocated to the U.S. as well as engineers and scientists working on the “Andromeda-gerät” were brought to America where they continued to work on this secret space project. 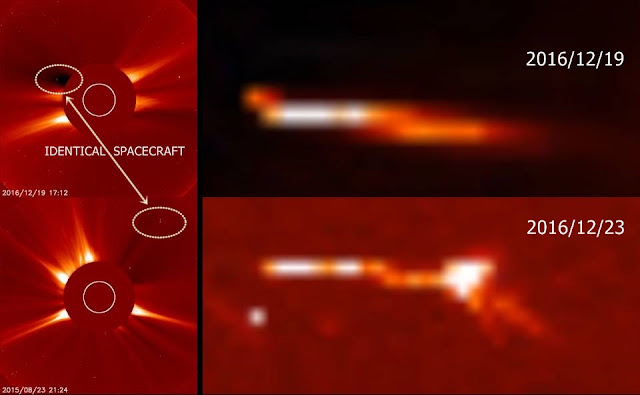 As those technologies were far more advanced than those possessed in 1945 they must have been helped by extraterrestrials.

About the project Andromeda-Gerät, Dr. Hermann Oberth, who pioneered rocket design for the German Reich during World War II and later advanced rocket technology for the American manned space launches cryptically stated, “We cannot take the credit for our record advancement in certain scientific fields alone; we have been helped.”

When asked by whom, he replied “The people of other worlds.”

Oberth’s fellow associate space pioneer, who also served the Third Reich, Werhner Von Braun, echoed similar knowledge of the extra-terrestrial reality when he stated in 1959, “We find ourselves faced by powers which are far stronger than hitherto assumed, and whose base is at present unknown to us. More I cannot say at present. We are now engaged in entering into closer contact with those powers, and within six or nine months time it may be possible to speak with more precision on the matter.”

Now, if we take a look at two images captured by NASA’s satellite Lasco C2, on December 19, 2016 and December 23, 2016 we see on both images a large cigar-shaped space object. (See image above.)

What is striking that both objects are similar to each other. Moreover it is likely a spacecraft orbiting the sun, accidentally photographed by the Lasco C2 satellite.

In 1945 German scientists were already capable to build a cigar-shaped spacecraft. Now 70 years later, you can imagine that such an object is probably one of the most advanced secret flying space objects capable to fly to other planets and beyond and though we cannot prove it, the spaceship depicted on both NASA images could be an advanced version of the original Andromeda-Gerät.