NASA and other scientific organizations claim that UFOs near the sun are merely a collection of streaks left by cosmic rays, charged particles from space, which whizzed through the camera’s sensor, or CCD, as the images were taken. 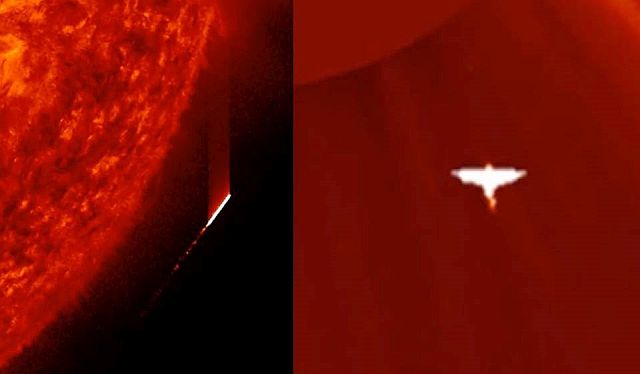 Besides, due to the extreme temperatures it is impossible that alien spacecraft can get close to the sun. Especially the material in the corona is extremely hot and the temperatures in the sun’s corona (upper atmosphere) can get as high as 2 million degrees Celsius makes that these UFOs will burn up, according to Skeptics.

So, where the aliens apparently do not have the technology to get their spacecraft close to the sun, NASA seems to have no problem with this issue.

And that is exactly what is going to happen next year when NASA will fly its Solar Probe Plus on its first mission into the sun’s corona (upper atmosphere) and “touch” the sun. 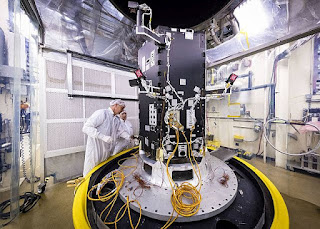 Solar Probe Plus as it appears in the above image is slated to launch during a 20-day window that opens July 31, 2018. According to NASA the spacecraft will collect data on the mechanisms that heat the corona and accelerate the solar wind, a constant flow of charged particles from the sun.

Where as the Space Shuttle has a reinforced carbon-carbon heat shield which is designed to withstand temperatures of up to 4,700 degrees Celsius, the heat shield of the Solar Probe Plus must be able to withstand temperatures of up to 2 million degrees Celsius which makes you wonder whether NASA is able to design such an advanced alien technique or maybe they got the information from third parties or unknown sources, think about information collected from crashed UFOs or a partnership between NASA and an alien race.

It is said that the sun is not what we’ve been told and despite the NASA organization says that their mission to the sun is to collect date only it may be a cover-up to hide the real purpose of their mission.

Meanwhile the NASA organization supported by all the skeptics, trolls and paid disinformation agents goes on to tell the people that UFOs near the sun are just only cosmic rays or charged particles from space. 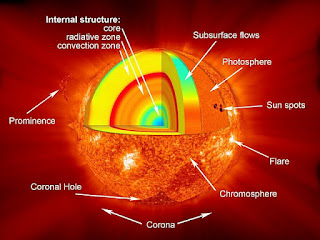 The temperature at the Sun’s surface is around 5,500 degrees Celsius.

The atmosphere of the sun is composed of several layers, mainly the photosphere, the chromosphere and the corona.

The lowest layer of the sun’s atmosphere is the photosphere. It is about 300 miles (500 kilometers) thick.

And the third layer is the corona which is the outer atmosphere of the Sun. It extends many thousands of kilometers above the visible “surface” of the Sun.