In our quest to discover the secrets of Antarctica the Russian journalist Nikolai Subbotin analyzes the KGB documents from the released folder “Orion” on the activities of the Nazis in the Antarctic before and during the Second World War. 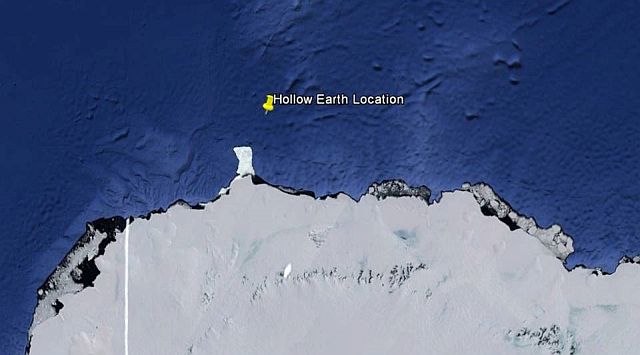 The location of the corridor to the Inner World of Agharta.

The following is a translated excerpt compiled from various reports on this issue.

This map shows us the main continent on this hemisphere, called Asgard. On the continent of Asgard, in the center, lies the city of the Ases. At the bottom left, we can clearly see Neu Schwabenland with the capital Neu Berlin. 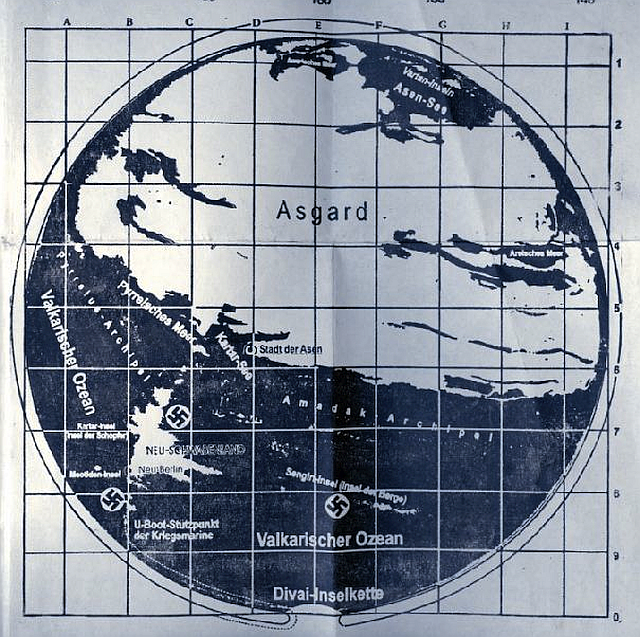 This map shows us the main continent of this hemisphere called Liberia. In the center, on the right, are the Fera Islands. Below is the city of Shambala (city of the gods). 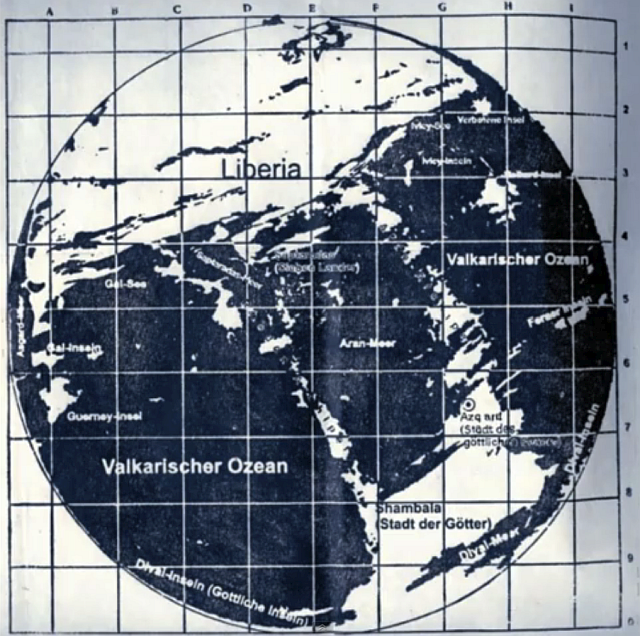 The Tibetan monks still say that the city of Shambala really exists but not on the surface of our planet but inside the planet. So here it is confirmed by the map that Shambala is a real city in the earth, on the inside of the crust.

This part of the Reichsdeutschen map describes an underwater path including a detailed letter with instructions how to dive and to get to inner world of Agharta using a U boat.

The next evidence of the existing of an inner earth is a letter from Karl Unger, crew member of U-209. See link bottom line to read original letter.

This message will be a surprise to you. The submarine 209 has done the earth is HOLLOW !. Dr. Haushofer and Hess were right. The whole team is doing well, but they cannot return. We are not prisoners. I’m sure this message will reach you, it’s the last link with the U 209. We’ll meet again comrade. I am anxious for those who have spent their lives on the surface of the earth since the Fuhrer has gone.

So far, it seems they have found the entrance to the inner earth. Moreover a secret Nazi expeditionary force was headed by Captain Ritscher and took a seat in 1937-38. The force landed near Queen Maud Land and established secret bases there.

It also explains why German UFO scientists, selected people and UFO test pilots including their machines and UFO prototypes, like the Haunebu’s 1, 2, 3 and 4 and the Andromeda Device possible built with the help of the aliens, were missing as they have escaped to the bases in Antarctica.

After an in-depth analysis the researchers have released the coordinates where you can find the corridor to the Inner World of Agharta.

As you can see the corridor to the Inner Earth is located in the Lazarev Sea which is the same location where the ocean research vessel of the Russian Baltic Fleet, the Admiral Vladimirsky, conducted hydrographical research of the water zones of the Antarctic last year.

According to the researchers, the US and Soviet governments have known about the secret Agharta entrance to the inner Earth and its inhabitants as well as the secret underground Nazi bases for over 40 years but they do not know how to deal with it and have therefore suppressed the truth.

Now it seems that these underground Nazi bases still exists and still operational. Moreover they believe that Hitler’s last battalion works together with the inner earth beings and they will come into action when the world is deep in an economic crisis.

Based on all this information, if truth, step by step it becomes clear why so many well known people as well as US and Russian Naval visit the Arctic.

Links to all original images and letters as well as more information provided by the sources Hollow Earth Blog and Imperialgermans.

English language:
Link to all original images and letters: https://translate.google.com/translate?hl=en&sl=de&tl=en&u=http%3A%2F%2Fwww.imperialgermans.com%2FDE%2Fdocuments.html

German language:
Link to all original images and letters: www.imperialgermans.com/DE/documents.html