Are we about to hear that ancient ruins have been found in Antarctica? Is there an Alliance working to defeat the greatest threat humanity has ever faced on earth? Could the Antarctic Atlantis be part of a full or partial disclosure? 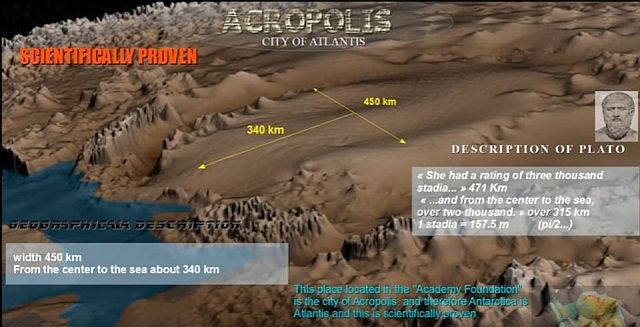 According to Charles Chapgood, whose 1958 book ‘Earth’s Shifting Crust’ featured a foreword by Albert Einstein, around 12,000 years ago the Earth’s crust shifted displacing the continent that became Antarctica from a location further north than it is today. 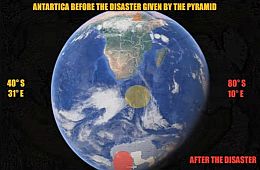 This more temperate continent was home to an advanced civilization, which is said where “Pre-Adamite” giants with elongated skulls who appears to have crash-landed on a continent we now call Antarctica some 55,000 years ago.

But the sudden shift to its current frigid location doomed the civilization’s inhabitants – the Pre-Adamite” giants, the Atlanteans – and their magnificent city was buried under layers of ice.

First they say that the soil was high above the sea.
All around the city reigned plain…its surface was smooth and steady.
All this part of the island was situated on the south, and protected against the north wind. The mountains that surrounded surpassed, says that fame, in number, size and beauty all those we see today.
She had a rating of three thousand stadia…471 km. and from the center to sea, over two thousand, over 315 km.

The description of Plato is amazing, but the most extraordinary is that it was the “Egyptians” who told Plato that, more precisely the Builders of the pyramid, with a message written with stones on the Great Pyramid.

Since 2003 NASA has used a satellite, ICESat for observing polar ice and with Operation IceBridge dataset BEDMAP2, obtained with laser and ice-penetrating radar, we can observe bedrock topography of Antarctica. 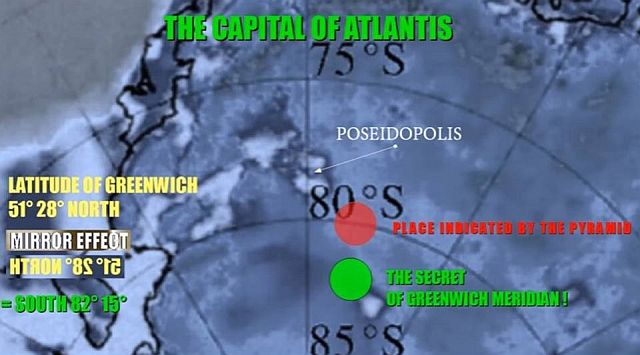 This area, consists of islands close to the sea level is the place of the Capitla of Atlantis, Poseidopolis.

As described by Plato:

“When we went through the three external ports, there was a circular wall beginning at the sae and everywhere distant fifty stages of larger enclosure and its ports. This wall was close at the same point the channel inlet side of the sea.” 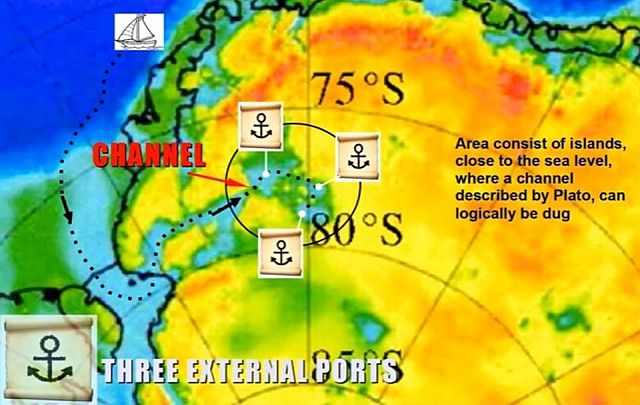 Moreover, if we take the map showing the detailed route of how to get to the Land or Underground Base beneath the ice, see map below…

then we see that the 1,530 km long route points to a place which is exactly on the coordinates of the Capitla of Atlantis.

If the researchers are correct with their analysis of the location of the Capitla of Atlantis and we connecting the dots we come to a stunning conclusion that all the stories about that ancient ruins have been found in Antarctica indeed could be true.

Now, according to David Wilcock, various groups we collectively call the Alliance are working to defeat the Cabal / Illuminati / New World Order succeeds, their plan is to begin the disclosure process by telling us about the ancient ruins and that there was an advanced civilization, who maybe still lives beneath the ice sheet, then we are on the verge of major new releases of information that will transform everything we thought we knew about life on earth.

See video below for more information on the lost city and read also the following very interesting links from the researchers on this issue.