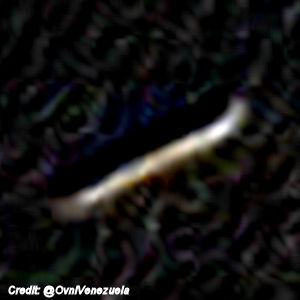 After six in the afternoon, William Escobar was in the garage of his mother’s house, when he noticed the presence of a planet shining in the sky, so he took his cell phone to capture the extraordinary scene with the camera .

“I’m fond of astronomy, and I wanted to take the photo of Venus that looked pretty nice,” he said. But as he held up the cell phone pointing up at the sky, a reflection in the distance attracted his attention. “I know it was something, because with my eyes off the phone I saw something happen very fast,” he warns, but I was still doubtful.

Shortly afterwards, as he reviewed the images, William found a response to his uneasiness, discovering surprisingly that the opaque flash, almost unnoticed, had been recorded on his mobile device, and that it was not a simple reflection, it had a defined shape.