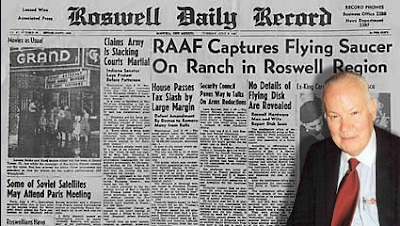 Here’s how this plays out. According to him, he, with the Sheriff in Big Spring, had traveled to Roswell to pick up a prisoner. While they were on their way, they heard, over the police radio, about the flying saucer crash. They drove out to the site, saw hundreds of soldiers, though Forgus didn’t know which branch of the service they were in (the US Army on their fatigues should have been a big clue), and saw a huge disk crashed into the side of a mountain.

He was asked if there were lights on the craft and he said, “No, they went out when it banged into the wall in the creek. It was like a mountain on the side of the creek.” (Though I’m not sure how he would have known that the lights went out when it hit because he wasn’t there.)

He also said, “We couldn’t see that well because of the trees. It was in a riverbank. It slammed into a river bank. I saw them lifting one up with the crane.”

I recognized the place he was talking about. I had been there, I had walked the land and I knew that there was no creek or river there but from the picture that had been printed in The Truth about the UFO Crash at Roswell, it looked as if there was. You can see for yourself that his description matches the picture except for the water.

He added, “The saucer hit the bank on this side of the creek and I was standing on the other side of the bank, at the top of the hill. I was looking down at the site…” (This is the point of view of the picture.)

This is what Frank Kaufmann had said as well. Same description of the craft having hit the side of the canyon wall near what looked like a creek or river. Of course, we all know that Kaufmann’s testimony has been discredited. And if Forgus is describing the scene as if he was standing on a cliff some distance away, then his tale is bogus as well.

Forgus added some detail that is interesting, but also somewhat contradictory. I know this because I have been to that place. From where he was allegedly standing, he said he could see the bodies, though he didn’t have a good description of them. He talked about the big eyes. He said, “They eyes looked like the ones we see on television and the pictures of them.”

But he was so far away, according to him, it is difficult to believe that he would have seen the eyes. The real clue is about having seen alien creatures on television. He just picked the most popular version of the aliens to describe.

Here’s another nugget. According to several of the witnesses, and this includes CIC agent, Bill Rickett, William Woody and former part owner of KGFL radio Jud Roberts, the roads out to the area had been blocked and the crash site was cordoned off. Forgus and his sheriff wouldn’t have been able to get anywhere near the site before they would have been stopped by the military. Forgus made it clear that the military was already there with hundreds of soldiers, a big crane and trucks to remove the craft (Can you say “Alien Autopsy?”). If that is true, then the cordons were up and a sheriff from Texas wouldn’t have been allowed to penetrate it. He and Forgus would have been stopped before they got close enough to see anything at all simply because they weren’t military, they weren’t the local law enforcement and they had no legal authority in New Mexico.

The other part of the story that fails is that they heard about this on the police radio, which seems unlikely, but even if that had been true, they wouldn’t have heard instructions on how to find the place. You can’t see it from the main roads, and the gravel and dirt roads into the area are quite rough and quite confusing. If you don’t know where you are going, you’d get lost. Without someone leading them in, or precise directions which wouldn’t have been broadcast, they would never have found their way to the crash site.

This story was uncovered by Philip Mantle and was told to Deanna Bever in 1999, a Los Angeles private investigator. The tale appears in the book, UFOs Today: 70 Years of Lies, Disinformation and Government Cover-Up by Irena McCammon Scott, Ph.D. and published by Flying Disk Press. It was edited by Philip Mantle.

Philip Corso and The Day After Roswell (Again)