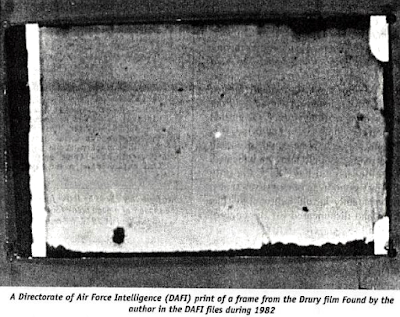 The intention of section 1 of this paper, is to provide a chronological account, of items about the incident, in the form of direct text quotes, or summaries where items are exceedingly long. Although the chronology is lengthy, it does provide a detailed account of what Australian government Departments, civilian UFO researchers, and other interested parties, have documented about the incident.

In any set of documents, there are inevitable errors. In some cases, the main witness is said to be T. C. Drury; C. T. Drury or T. P. Drury. T. P. Drury is in fact correct. The date of the incident is actually 23 August 1953. However, it is sometimes said to have been 24 August 1953; 23 August 1957; Christmas 1953, or 23 August 1954. The location in at least one document, is said to have been Darwin, although it actually occurred in Port Moresby. The time is generally stated as 12 noon, but in at least once instance is shown as 11 am. There are other inconsistences, which the alert reader will detect.

There are numerous references to the Drury incident, in other UFO magazines; books, and on the internet. However, none of these provide any information, not already provided below, so these have not been cited.

Due to the passage of time, many of the individuals mentioned in this paper are no longer alive. The authors advise the reader, that have not re-interviewed any witnesses to the sighting, given the age of the event. Instead, they feel that there is far more value to utilising the text of sources close to the date of the event. The authors also disclose that they have not been able to view any of the colour film, or any first generation still photographs copied from the film. However, they do cite the opinions of individuals who have done so.