A spectacular sight occurred high in the sky above the Philippines on April 23, 2017. It almost resembles some kind of giant craft with multiple independent color levels. 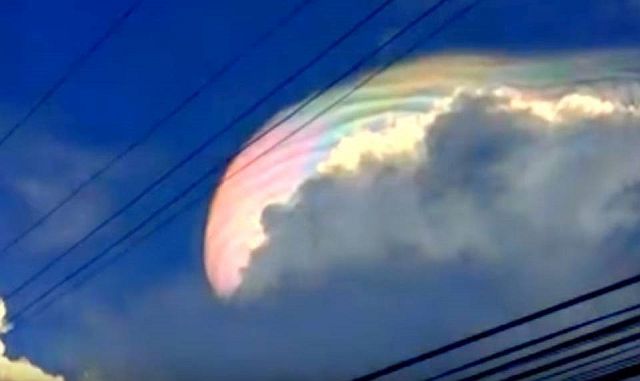 It is said that the rare phenomenon is a so-called fire rainbow which occurs when sunlight refracts through ice-crystal clouds or this phenomenon could be the effect of electromagnetic plasma ionization, a disruption of the Earth’s magnetic field and/or ionosphere in the region of tectonic stress, resulting in the observed glow effects either from ionospheric radiative recombination at lower altitudes and greater atmospheric pressure?

Maybe the phenomenon is a so-called earthquake light? However, the effect is clearly not pronounced or notably observed at all earthquake events and is yet to be fully understood, but with 105 earthquakes in the past 30 days off the west coast of Chile, including the powerful 7.1M earthquake which has struck off the coastal area near Valparaíso, some 60 miles west of Santiago, yet all the earthquakes that occur in the ring of fire in mind, the rare phenomenon in the sky above the Philippines could be a sign for an upcoming natural event.