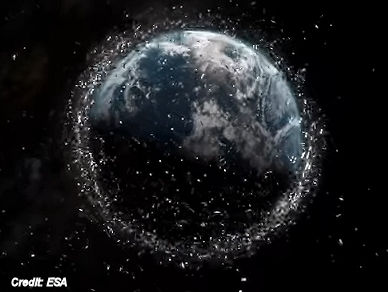 The U.S. Space Surveillance Network currently tracks some 18,000 objects larger than 4 inches (10 centimeters), of which only 1,200 are intact, operational satellites. In addition to that, there are 750,000 so-called “flying bullets” about 0.4 inches (1 cm) in size and around 150 million fragments smaller than 1 millimeter.

British firm Hempsell Astronautics has proposed a system dubbed Necropolis that would collect defunct geostationary satellites and deliver them to a single spot in the so-called “graveyard orbit.” This area is situated a few hundred kilometers above the roughly 22,000-mile-high (36,000 km) geostationary ring.

Necropolis would consist of two spacecraft: a Hunter, which collects other spacecraft and pushes them up away from the geostationary ring, and a Terminus, the final parking spot for the no-longer-needed satellites. …