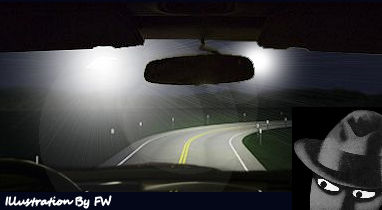 mapping,” the witness stated.“I observed two white lights traveling in a slow and seemingly aimless manor to my west between 10 and 30 degrees above the ground. The distance was hard to judge due to the darkness and terrain, however, my best estimate would be less than a mile.”

The witness got out of his vehicle and leaned against the front fender to smoke a cigarette.

“I watched curiously as the lights drifted and floated silently in the sky. I got back into my car and drove up the road approximately 100 yards in order to see if I might get a better perspective. Upon exiting my vehicle, the lights appeared a little closer, however, I still heard no sound coming from the direction of the lights.”

Then the lights disappeared.

“Approximately 30 seconds later the lights simply disappeared. No bright flashes. No speeding off into the distance. They just vanished from my view. Puzzled, but not concerned, I stamped out my cigarette and got back into my car.”

But the witness was quickly startled again.

“Before I had a chance to start the engine, a man seemingly appeared out of nowhere behind the driver’s left rear of my car. I was quite startled by his sudden appearance, but for some reason I wasn’t frightened. He was dressed in dark clothing and I remember his shoes were noisy, like hard soles on gravel. …

Sharp-Dressed Men: The Men-in-Black are Back