The carcass of a giant sea creature was discovered by locals on the coast of Hulung Village, Iha Kec. Huamual Kab. Seram Bagian Barat, Maluku on May 9, 2017. 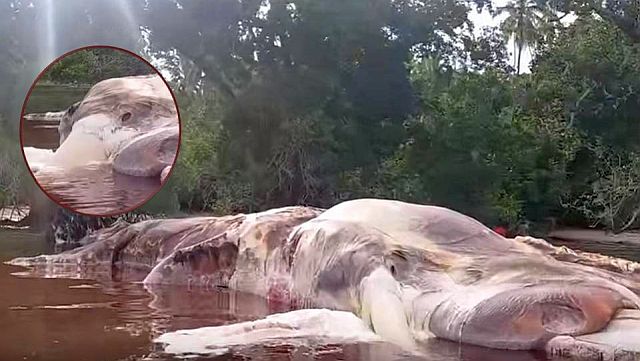 Currently officials are checking the carcass of the giant creature of what could be of a giant squid, thought they are not yet sure as the size of the animal is about 20 meters long and its weigh is about 35 tons what is extraordinary when you think that the length of such deep sea animals very rarely exceeds 13 m for females and 10 m for males from the posterior fins to the tip of the longest tentacles whereby the maximum weight is estimated at about 275 kg.

As these creatures normally living in the depth of the oceans at a range of between 300-1000 meters it is unknown and extremely rare why this giant squid came to surface to die, ending up on the coast of Hulung village.

According to the officials, it is thought to have died more than three days ago, given the swollen condition of the animal.

A reason for the death of this deep sea creature could be due to the fact that oceans are losing oxygen rapidly especially low-oxygen areas are expanding in deep waters, killing some creatures outright.

While the cause of the death of the giant squid is still unknown it is quite possible that the animal came in a gigantic pool of low-oxygen, then staying up high, trying to avoid suffocating below.

According to Nationalgeographic warming temperatures are sucking oxygen out of waters even far out at sea, making enormous stretches of deep ocean hostile to marine life with as a result that in more and more places around the world, these predators, rather than using their formidable power to plunge into the depths again, they are sticking near the surface and dying.