The world’s best-preserved dinosaur was found in Alberta, Canada in 2011. The discovery came as a surprise, as it was found by a heavy-equipment operator named Shawn Funk who was working at the Millennium Mine, a vast pit 17 miles north of Fort McMurray, Alberta. 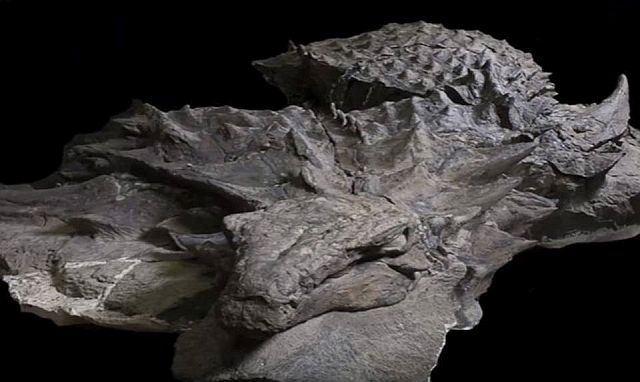 The fossil, dubbed the ‘four legged tank’ is a newfound species of nodosaur, which lived midway through the Cretaceous period, between 110 million and 112 million years ago.

The creatures were around 18 feet (five meters) long on average and weighted up to 3,000 pounds (1,300 kg) and it featured two 20-inch-long spikes which protruded from its shoulders.

The fossilized remains of this particular specimen are so well preserved that remnants of skin still cover bumpy armour plates along the dinosaur’s skull according to reports in National Geographic.

The fossil was sent to the Royal Tyrrell Museum of Paleontology where they spent the next six years working on uncovering the beast within the 2,500-pound (1,100 kg) lump of earth.

The Nodosaur will now form part of The Royal Tyrrell Museum’s new exhibit, Grounds for Discovery, in Drumheller, Alberta.