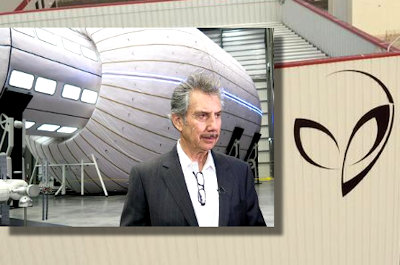 than at America’s space agency, and he’s obsessed with aliens and UFOs. In the spring of last year, he and NASA carried out an historic test to prove his high-flying technology is ready to support humans in space.

But on this canyon road just outside Las Vegas, Robert Bigelow’s story takes a turn that some may find, to put it lightly, improbable. He told us this is where his grandparents had a close encounter with a UFO.

Robert Bigelow: It really sped up and came right into their face and filled up the entire windshield of the car. And it took off at a right angle and shot off into the distance.

The story sparked his obsession, and explains the alien looking out from the side of Bigelow Aerospace. And it made for the kind of conversation you don’t ordinarily have with an accomplished CEO.

Lara Logan: Do you believe in aliens?

Robert Bigelow: I’m absolutely convinced. That’s all there is to it.

Lara Logan: Do you also believe that UFOs have come to Earth?