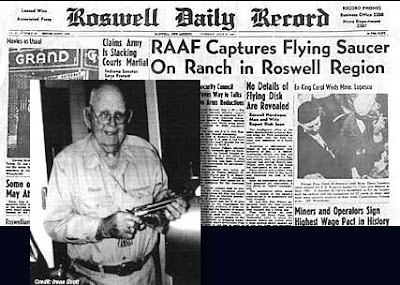 Here’s how this plays out. According to him, he, with the Sheriff in Big Spring, had traveled to Roswell to pick up a prisoner. While they were on their way, they heard, over the police radio, about the flying saucer crash. They drove out to the site, saw hundreds of soldiers, though Forgus didn’t know which branch of the service they were in (the US Army on their fatigues should have been a big clue), and saw a huge disk crashed into the side of a mountain.

He was asked if there were lights on the craft and he said, “No, they went out when it banged into the wall in the creek. It was like a mountain on the side of the creek.” (Though I’m not sure how he would have known that the lights went out when it hit because he wasn’t there.)

He also said, “We couldn’t see that well because of the trees. It was in a riverbank. It slammed into a river bank. I saw them lifting one up with the crane.”

I recognized the place he was talking about. I had been there, I had walked the land and I knew that there was no creek or river there but from the picture that had been printed in The Truth about the UFO Crash at Roswell, it looked as if there was.

The Children Who Bore Witness to Roswell: Their Tragic Stories Finally Revealed