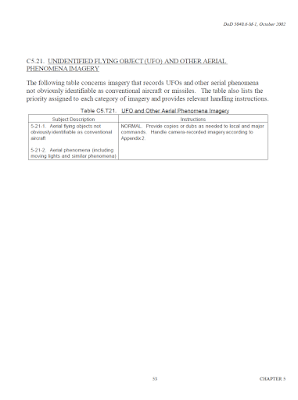 program, Project Blue Book, on the 17th of December, 1969, it was commonly accepted that no government agency, including within the military, would further accept or investigate UFO reports. Thus, one would expect that no formal publications dealing with UFOs would be promulgated beyond 1970. We know, of course, that this is not true. Numerous examples of classified military doctrine that deal with UFOs have come to light, as I have highlighted in previous blog posts.

“This Manual is issued under the authority of DoD Instruction 5040.6, ‘Life Cycle Management of DoD Visual Information,’ April 10, 2001 (reference (a)). It contains guidelines for both the recording of visual information (VI) in the field by camera operators and the accessioning of such VI as VI records into a records center, such as the Defense Visual Information Center (DVIC).

Put simply, “DoD Manual 5040.6-M-1, Decision Logic Table Instructions For Recording And Handling Visual Information Material” describes how photographs and moving images, which have been obtained by members of the US Armed Forces, must be captured, transmitted and stored. A “Decision Logic Table” (DLT) is laid out throughout the Manual, and cover myriad events and scenarios which may present to military personnel, and other members of the DoD. Within the DLT, individual tables categorize specific scenes or situations, and provide disposition instructions, including priority and importance, for imagery contained in for each category. Dozens of topics, from “POST-BATTLE ACTIVITIES IMAGERY” to “NATURAL TERRAIN AND SITE IMAGERY”, are covered.

Curiously, one of the topics listed is UFO’s and other unidentifiable aerial phenomena (see above).

“445 Sightings of UFOs Recorded by the Italian Air Military”