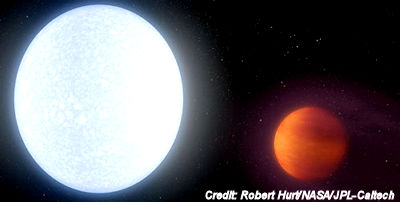 star once every 1.5 Earth days. Its orbit is so tight that the gas giant is tidally locked, always showing the same face to the star, just as the moon shows only one face to Earth.

Temperatures on KELT-9b’s “day side” reach a blazing 7,800 degrees Fahrenheit (4,300 Celsius), the planet’s discoverers said. That’s hotter than the surface of the dwarf stars that dominate the Milky Way galaxy, and just 2,200 degrees F (1,200 degrees C) cooler than the surface of the sun. (However, temperatures in the sun’s outer atmosphere, or corona, can reach about 3 million degrees F, or 1.67 million degrees C.)