Currently NASA put’s their SOFIA every day in the air. SOFIA (Stratospheric Observatory for Infrared Astronomy) is built into a converted Boeing 747SP. 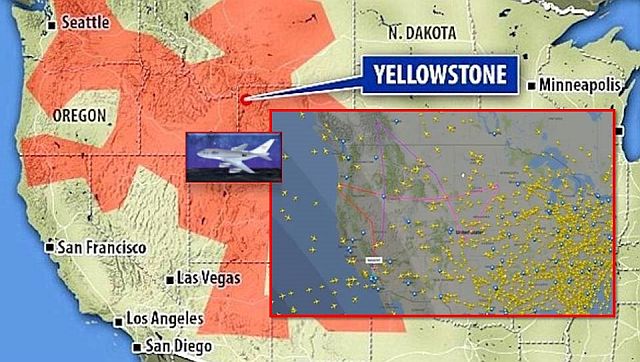 SOFIA’s 2.5-meter (8.2-foot)-diameter infrared telescope will make it the world’s largest and most sensitive airborne observatory. Flying at 39,000 to 45,000 feet, it will enable scientific observations that are impossible for even the largest and highest of Earth-based telescopes.

Already four days during sunrise/sunset NASA is monitoring the sun but yesterday, June 12, 2017 flightradar24 shows that they monitoring Yellowstone National Park too.

Remember the Massive Lake of Molten Carbon the size of Mexico recently found under Yellowstone?

The molten carbonate sits beneath Yellowstone National Park, which in and of itself is a super volcano with the power of a massive eruption. The last major eruption was 640,000 years ago at Yellowstone, however if the super volcano did erupt it could cause the US to go into a volcanic winter.

If NASA puts its SOFIA in the air it’s important. This Bird of Prey doesn’t go ‘hunting’ unless there is something TO hunt, they watching something, bet on it!