A Missouri witness at Mexico recalled a UFO incident from 1977 when she and her then 10-year-old son encountered an object following them along a rural roadway, according to testimony in Case 83874 from the Mutual UFO Network (MUFON) witness reporting database. 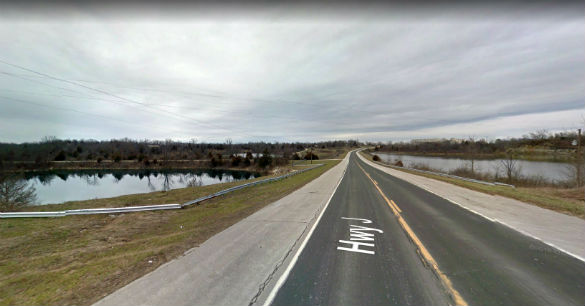 The witness and her son noticed a ‘fiery image’ just ahead of them that could not be identified. Pictured: Mexico, Missouri. (Credit: Google)

The incident occurred during the summer of 1977 – approximately June 17.

“I was returning home after driving to a nearby town 30 miles away to see the movie, “Chariots of the Gods.” It was approximately between 9-10p.m. CST. I was driving on a blacktop road rather than the highway since it was a shorter way to get home. As I was driving north, I noticed ahead of me, and to the left of the road,a fiery image about treetop level and I mentioned to my son that it must be a barn on fire.”

About two minutes later, the witness reached a curve in the road.

“The fiery image moved from its location left of the road and instantly appeared on the right side of the road. I knew then it was a UFO due to how quickly it maneuvered direction. I was then driving east with the UFO following me to my right – about 100 feet higher than my van – and it stayed maybe two car lengths ahead of me. The UFO seemed to be traveling the same speed as I was, which by then I had probably slowed to about 40 mph.” 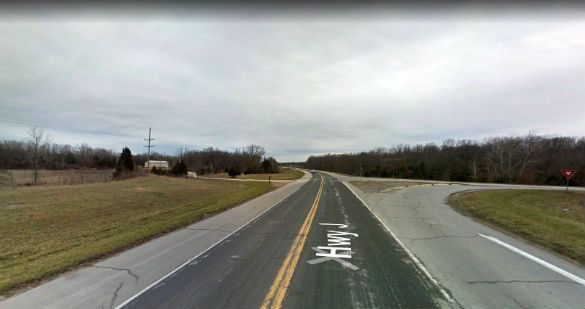 The object moved just ahead of the car and kept pace with it. Pictured: Mexico, Missouri. (Credit: Google)

The witness continued to watch the object.

“After about 30-45 seconds of following us, it instantaneously appeared about one-quarter mile ahead and to the left side of the road. It was stopped and hovered above a grove of trees.”

Since the object had stopped, the witness did not want to keep driving.

“There was a house there, so I pulled into someone’s driveway and thought about going up to their door to let them know of the UFO so people wouldn’t think I was just making it all up. But figured, as sure as I did, it would disappear. My son thought I should keep driving, but I told him I didn’t want to be abducted or have my car engine fail.”

As the object hovered, the witness was able tomake out the shape and a few features.

“It was disc-shaped with a seemingly darker band around the center of it and a lot of fire from the underneath. Either the flames below were so bright that they illuminated the craft or the moonlight was such that I couldn’t get a good view of it (or both).”

After about four to five minutes of wondering what to do, the witness decided to attempt to communicate with the object. 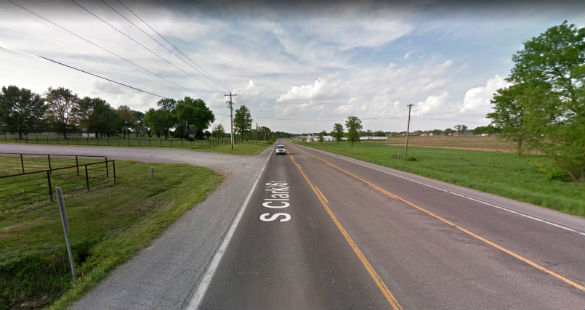 The witness attempted to communicate with the object when it stopped. Pictured: Mexico, Missouri. (Credit: Google)

‘I said, ‘I know that you can hear me because you all are a lot more intelligent and advanced than we are, so please just go on and leave us alone.’”

After about 10 seconds, the UFO moved away at “lightning speed in an upward and south-easterly direction” anddisappeared from view.

“The entire time of the sighting, I encountered no traffic in either direction. However, as soon as it disappeared, there was traffic again. The image of the UFO actually looked a lot like the spaceship image on the album cover of the band “Boston’s” first album in 1976. I have since regretted that I didn’t try to make better communication because I would like to communicate with them. Evidently, they were seeking me out, but I just had no idea of their intent.”

Mexico, formerly known as New Mexico, is a city in Audrain County, Missouri, population 11,543. Missouri MUFON State Section Director Charles Frieden is investigating. Please remember that most UFO sightings can be explained as something natural or man-made. The above quotes were edited for clarity. Please report UFO activity to MUFON.com.