In 1977, scientists working on the search for extraterrestrial intelligence (SETI) recorded an unusually strong radio signal, the origin of which many scientists believe has not been explained. While the most exotic theory is that the signal is a call from ET, a paper published in the Journal of the Washington Academy of Sciences claims the origins of the signal is much more mundane. They think a comet or two caused it. SETI scientists, including the senior astronomer at the SETI Institute, Seth Shostak, and the man who discovered the signal, disagree. 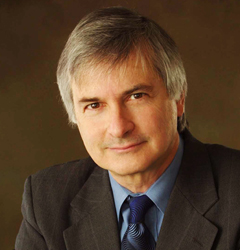 As Shostak puts it in a recent article, the “Wow! Signal” is in the “A-List” of signals recorded by scientists that may potentially have been generated by an intelligent extraterrestrial civilization. It is an exclusive list. Shostak did not mention how long the list is, but it can be argued the “Wow! Signal” is the only signal on that list.

In August of 1977, a signal was captured by a radio telescope called Big Ear at Ohio State University. Upon discovering the signal while reviewing the logs, astronomer Jerry Ehman circled it on the computer printout and wrote “Wow!” off to the side.

The signal was very strong, and according to Shostak, “It had all the characteristics one would anticipate from a signal produced by a deep space transmitter.”

However, despite efforts to capture the signal a second time, it was never heard again.

“So the WOW signal seemed destined to be an enduring mystery of the universe – maybe it really was ET launching a signal in our direction, a whistle that was either very short or very intermittent,” Shostak wrote. “Then again, perhaps it was something else…”

This is where the new paper in the Journal of the Washington Academy of Sciences comes in. The paper is authored by Antonio Paris and Evan Davies. Interestingly, Paris, an astronomer at St. Petersburg College in Florida, also has an interest in UFOs. In fact, he was been an investigator for the Mutual UFO Network (MUFON), and has lectured on the topic at several UFO conferences. 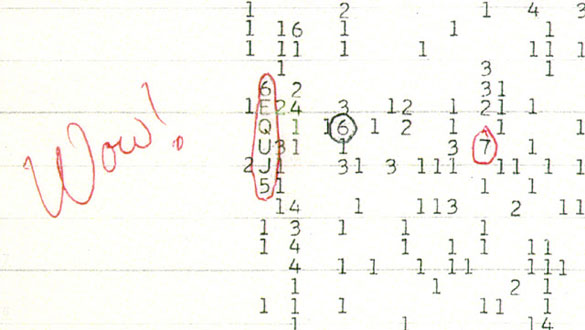 A scan of a color copy of the original computer printout, taken several years after the 1977 arrival of the “Wow!” signal. It was a strong narrowband radio signal detected by Jerry R. Ehman on August 15, 1977, while he was working on a SETI project at the Big Ear radio telescope of The Ohio State University. The signal appears to have come from an area of the sky with no stars or planets, northwest of the globular cluster M55. Image Credit: The Ohio State University Radio Observatory and the North American AstroPhysical Observatory (NAAPO).

In the paper, the authors argue that the signal likely came from a comet or two that was not catalogued at the time the signal was detected. That would explain why Ehrman and others would not have known suspected the comet(s).

“Neutral hydrogen is well known for generating radio static at a frequency of 1420 MHz, which is indeed the spot on the dial where the Big Ear overheard the signal,” admits Shostak. However, he continues, “The comet hypothesis, in my opinion, doesn’t work.  To begin with, there’s the slightly dismaying fact that I’ve never heard of anyone measuring strong hydrogen signals from a comet, and I’ve spent a lot of time on radio telescopes tuned to 1420 MHz.”

Shostak also points out that there were two receivers that examined the area of the sky the signal was received. The second sweep, which was only 70 seconds later.

“But the WOW signal only appeared in one of the feeds,” Shostak continued. “Of course, that could be explained if the signal simply went off the air in the time between observation by the first and second feed.  Terrestrial interference could be compatible with this requirement, easy peasy.  And a signal from impatient aliens could too.”

Comets, on the other hand, do not turn on and off. They move slowly, and should have been detected in the second feed.

Ehman recently told Live Science in a recent interview that he does not buy the comet theory for the same reasons Shostak presented.

“We should have seen the source come through twice in about 3 minutes: one response lasting 72 seconds and a second response for 72 seconds following within about a minute and a half,” Ehman told Live Science. “We didn’t see the second one.”

Paris admits this is an issue. However, he suggested to Live Science that the telescope might not have detected the signal in the second feed due to an error with the telescope itself.

“There is some data out there to suggest the issue is at the telescope end and not the phenomenon itself,”Paris told Live Science.

So the mystery continues. However, Paris has not finished making his case. He plans to continue to observe comets and the reasons behind why they create the signals.

“There have been a handful of studies, but I suspect we are the first to specifically build a 10-meter radio telescope to specifically look at this type of solar system body,” he said.