As firemen fight the devastating fire at the Grenfell Tower a UFO is easily seen in the sky above. 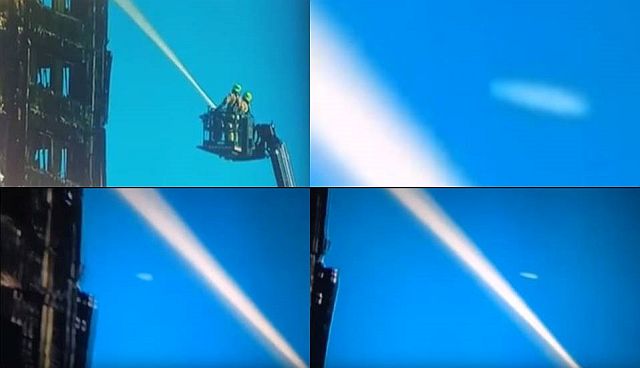 Witness 1: Whilst watching a report about the Grenfell Tower fire in London on Euronews on TV today, 16, I spotted a rather peculiar white object which seemed to be flying in a straight vector behind two firemen on a ladder.

Witness 2: While I was keeping up with this tragic event, watching the BBC news channel today I happened to notice this strange object fly past the burned out Grenfell tower block.

I have recorded this footage on my phone from my television set so quality is not at its best, but you can clearly see a UFO in the background during this live interview.

When the fire officers turn on the hose a large white object comes into shot, it is not an aircraft shape and too fast to be a plane.