An Iowa witness at Millerton recalled a UFO incident from the early 90s where the object moved over his vehicle at one point and beamed light onto the vehicle, according to testimony in Case 83673 from the Mutual UFO Network (MUFON) witness reporting database. 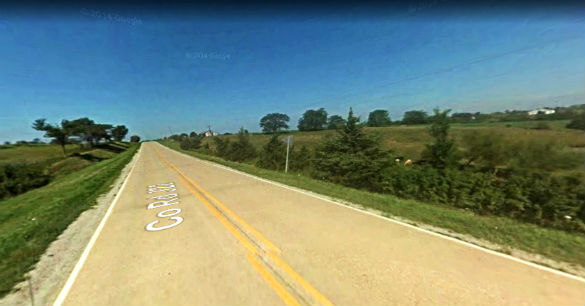 “I can’t remember the exact year and day, but I know that it was between 1990 and 1992,” the witness stated.“It occurred in rural Wayne County, Iowa. I had two young sons at that time. One was around 2 or 3 and the other was 4 or 5 at the time. That’s why I can narrow down the time that it happened. I had been at some friend’s house in the Corydon area that evening. They had two sons the same age as mine and the kids played while we played cards for awhile.”

The hour was late and past the kid’s bedtime, so the witness left to go home.

“The boys fell asleep in the car not far down the road.I was driving eastbound on a county highway east of Millerton. It was between 9-10 p.m. I believe. I noticed a bright flash of light to my left. It was maybe 10 or 15 miles directly north of me hovering low in the night sky. It would flash a bright light every second.” 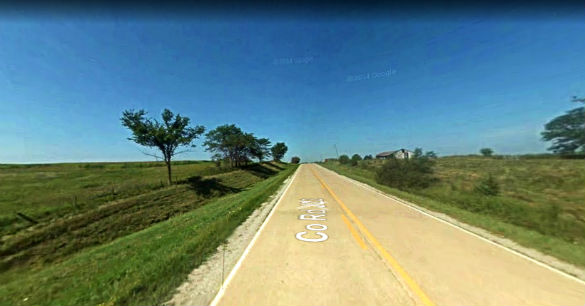 The witness watched the object instantly jump from one area of the sky to another. Pictured: Rural area near Millerton, Iowa. (Credit: Google)

The witness first thought the object was a helicopter – possibly life flight on its way to Corydon Hospital.

“I soon realized it wasn’t. I continued to glance over at it as I drove another mile or two. It just seemed to hang in the same spot. And the flashing light was just brilliant. Much brighter than any plane or helicopter.”

The witness decided to pull over on the shoulder to see what this object was.

“I drove a Pontiac Sunbird at that time and had the window rolled down while watching it. I shut off the lights and killed the engine. After a few minutes, I noticed the light was a bit brighter as if it had moved closer, yet I never saw it move. Then after another minute, it changed locations again. It was several miles closer to me. This thing moved so fast. It would hover motionless for a short while and then in the blink of an eye it would change locations. In a matter of minutes, it was approximately a half-mile north of me 50-75 feet above a crop field.”

At this point, the witness could see that the flashing light was actually a beam of light shining downward from the craft at about a 75-degree angle and making a full rotation approximately every second.

“I still couldn’t see the craft itself. Then it was suddenly a hundred yards due north hovering over the field. The brilliant beam of light shined all the way to the ground as it rotated in a wide circle. I’d never seen anything like it. It lit up the ground beneath it like daylight. You could see what looked like little dust particles in the light. It was weird. I thought for a moment that I should try to get out of there. But I was really intrigued with this thing. I still couldn’t make out the craft itself.” 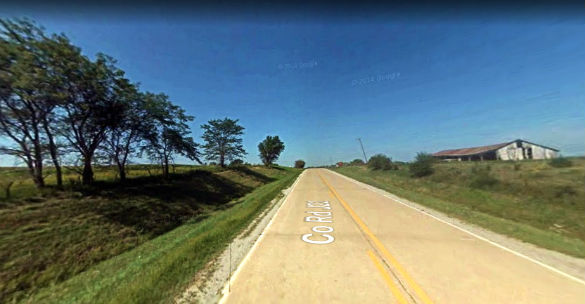 The object eventually moved overhead and shown a beam of light into the witnesses’ vehicle. Pictured: Rural area near Millerton, Iowa. (Credit: Google)

Then in the next moment, the witness realized the craft was no longer there.

“No more beam of light, nothing. Before I could even think about it, the car filled with a brilliant flash of light for just a moment. It was almost blinding. There was a peculiar feeling in the air like static electricity that seemed to wash over me.”

The witness then craned his head out the window and looked up.

“Above me was a large area of blackness and I knew it was above me. It was silent. The light wasn’t shining from it. Then for just a little bit, the underneath of it lit up with a bunch of smaller, blinking lights.”

At this point the witness was able to make out the shape and size of it.

“It was larger than I thought. Probably 40-50 feet in diameter and hovered about 40-50 feet above me at maybe a 75-degree angle. If it had tilted to a vertical position, I think I could have touched it. It was the shape of a disc. I thought to myself, “My God. I can’t believe I’m seeing this.’

Then in an instant, the craft was a half mile away.

“With the light beam rotating back down at a 75-degree angle as before. And in the same way that it came to me it left. Hovering for short intervals before zipping to another spot miles away, leaving only a faint streak of light between the two points. It was going east and slightly north. At one point, I estimated it as being probably in the Ottumwa area. Eventually it got far enough away that I couldn’t distinguish it from a star. The last time I could see it flashing I would guess it was perhaps in the Fairfield/Mt. Pleasant area headed in the direction of Burlington.”

The witness was upset over the incident.

“I was pretty shaken by this whole thing and watched it go away partly because I wanted to be certain the thing wasn’t going to turn around and come back. It scared the crap out of me to be honest. The boys didn’t wake up, so they never knew it even happened. When I got home, I called my friend whose house I had been to earlier. He didn’t believe me. Then awhile later, he heard that others had seen something too and had called the sheriff and reported it. They were told that it was a helicopter. I explained to him that it wasn’t, and he sternly replied, ‘I don’t know what you saw, but don’t be telling people about it. They’ll think you’re nuts and throw you in a padded room.’  So I haven’t. For the past 25-plus years.”

Millerton is a city in Wayne County, Iowa, population 45. Iowa MUFON Assistant State Director Beverly Trout investigated this case and closed it as an Unknown. Please remember that most UFO sightings can be explained as something natural or man-made. The above quotes were edited for clarity. Please report UFO activity to MUFON.com.