A Washington witness at Sunnyside reported a slow-moving, triangle-shaped object that followed his vehicle along a rural roadway, according to testimony in Case 83989 from the Mutual UFO Network (MUFON) witness reporting database. 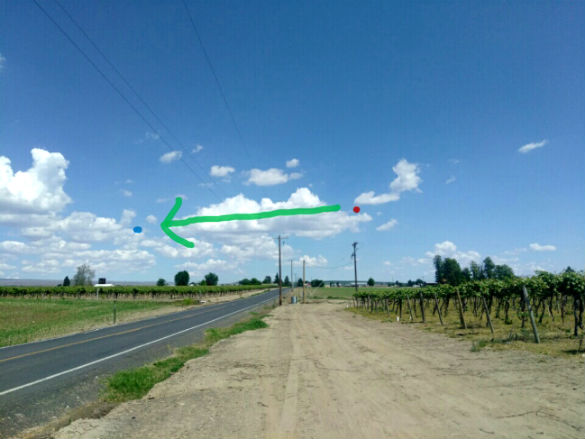 “I take the back roads home and got on Factory Road outside of Sunnyside, Washington,” the witness stated.“After about three minutes or so traveling down the road, I noticed an orange light near two red lights in a triangular pattern. The orange light was blinking.”

The witness immediately thought the object was a Chinook helicopter.

“I found it strange how low it was to the ground and the lack of sound. I also noticed it was traveling a bit fast to be a helicopter. It flew from south to north.”

The witness then thought that the object might be a drone.

“My speed was about 50 mph, though I was slowing down not wanting to get too close to the object. It crossed the road in front of me and then I proceeded to pass it. I found it to strange – it grabbed my curiosity. An oncoming car passed me, and once it did I pulled into a dirt driveway and turned around – doing a U-turn. I quickly drove back and found that it was out in the same area I had left it.”

The witness then slowed down in the middle of the road with no place to pull over.

“I simply stopped in the middle of road – now able to see a mile infront of me and behind me. I was facing west with my back to the east. It seemed to stop flying south and began to fly west.” 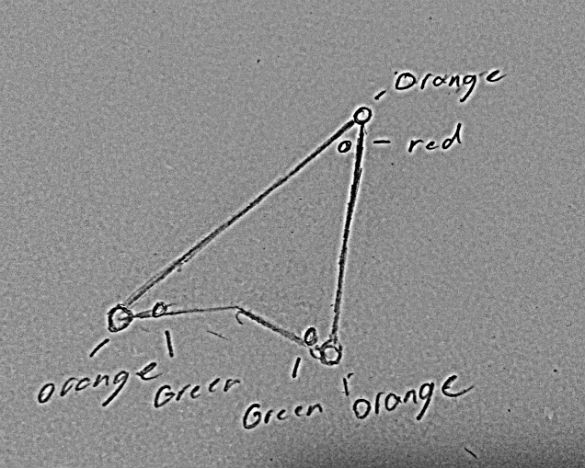 The witness quickly reached for his smartphone and pulled up the camera app.

“I began to record as I drew closer. This was when I noticed a white light, much like a star starting to fly down from above it and near the object. It quickly got my attention as it quickly stopped again and turned 90-degrees and flew south across the road again. Once it had done this, it began to fly west.”

The object was then flying parallel to the road and began to make the witness afraid.

“Though it stopped and then began to fly northwest from its location towards me, I became overwhelmed with fear knowing this wasn’t a plane or a helicopter. Having both my windows down, I would have heard something. I threw my phone in the passenger seat and began to speed off. As I began to pass it, I came as close as I ever was to the object.”

“It was a gray triangle, with three orange lights and one red, glowing light in the middle with two small, green lights near the rear. It was hovering. I am now driving back from where I had come from. Heading into Sunnyside on Factory Road. I reached a speed of 97 mph and quickly began to slow down. I felt safer near town, though, now that it was nearly 11 p.m. and no one would be around.”

But that safe feeling quickly dissolved.

“I turned left onto Handford Road, and before getting to Vakima Valley Highway, I turned left onto another road that was near a car dealership and stopped again to see if I could​ see the object. It was flying west again and was in the same light configuration as when I first saw it – with one blinking, orange light and two red ones. I watched it fly for a short time before it began to fly southwest and I didn’t want it getting too close again. I got back onto Handford Road and onto Yakima Valley Highway driving towards Grandview.”

Cropped piece of witness illustration from the scene. (Credit: MUFON)

But once the witness arrived home and got of his vehicle, he saw the craft again.

“It had followed me approximately six miles and was flying southeast, though, I did not turn and I watched it fly in that direction until it was out of sight. I thought about following it, but didn’t want to push my luck as I began to feel afraid again. When I reviewed the video I recorded, the object was not captured due to it being too dark outside, and had stop recording without me pressing pause as I passed the object.”

Sunnyside is a city in Yakima County, Washington, population 15,858.Washington MUFON State Director James Clarkson investigated and closed this case as an Unknown.

“I would point out this case was near the Hanford Nuclear Reservation,” Clarkson stated in his report. “Given the highly unusual shape and lighting configuration, and the lack of sound when the witness had parked his car with all of the windows down, I am classifying this case as a true UAV with a highly credible witness.”