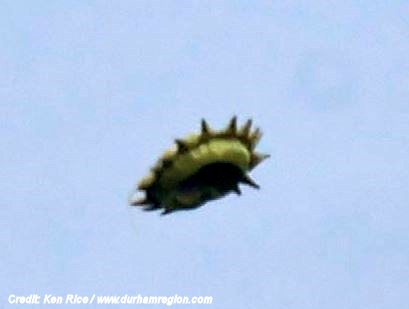 “It came out of no where, this thing,” said the Oshawa resident, who was at the marsh area near the General Motors of Canada headquarters on Colonel Sam Drive at about 7:45 p.m. on June 17 when he noticed the object off in the distance.

“I was walking back to my car and I just saw something pop out of no where, way up high, far away in the sky,” he said.

“I thought it was a big turkey vulture so I just took a picture of it anyway and then it kind of hovered, sat there for a minute and then it took off.”

After returning home, Rice took a closer look at the image and said he has no idea what it could be.