A weird object has been observed in the skies over New Zealand on July 1, 2017.

The photographer who took images of the object has no idea what it is, though he got the feeling that it might be a kind of machine. 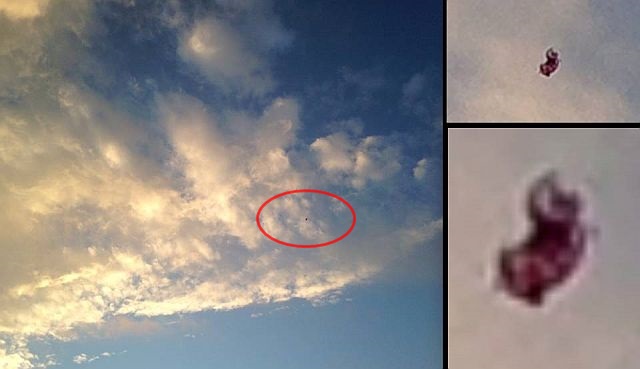 About the event the photographer states: I take photos of the sky quite often and decided to take some cloud shots in the afternoon. I did not see this object until looking back at my photos and noticed a pinpoint dot two photos. After I zoomed in and spotted an object of strange shape and red in color.

A few of my friends have seen the images too and they have no idea what it could be. I have tried to zoom in and filter with no luck at all I feel like it’s part of a machine or something but it looks nothing familiar at all. At all, it’s fascinating that I caught this shot which I have submitted to Mufon case 84734 and I will keep it forever.

Additional: I have also tried to analyze the object en to me it looks like something is carrying a body, what tends to be a humanoid form keeping his hands on some sort of laptop/notebook or could it be a control panel?

Did the witness accidentally has captured a so-called Manned Maneuvering Unit something like NASA Astronaut Bruce McCandless has used outside the Space Shuttle Challenger on the Shuttle mission STS-41B in 1984?

Could it be a secret test case of a Maneuvering Unit manned with a new technology resembling a humanoid or a robotic form?