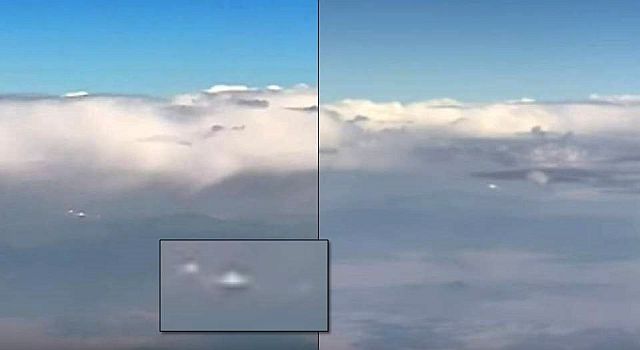 Havasu City, Arizona – May 5, 2017: I fly weekly, so I’ve seen a lot in my years of travel. On this particular flight on the 5th, I suddenly caught a shining bright light from my corner vision.

It wasn’t a reflective shine; it had a gold shine as video may indicate.

We had just passed Lake Havasu (I was tracking our flight).

The objects were moving in what seemed a northwesterly direction. See video below.

Case 2: Dark square changing into a bell like object hanging from a strange oval cloud over Aylmer QC, Canada. 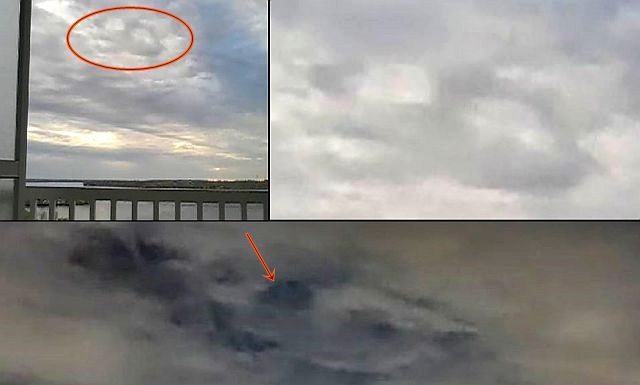 On May 16, 2017 I was looking out my window at the river and dark clouds. All if a sudden one if the clouds hanging over the river between Ontario and Quebec seemed to have what appeared to be a darker square like cloud under it but seemed attached.

I took out my binoculars and sure enough it looked like a small dark square made of something solid bout cloud was over it.

I put down the camera for a minute and when I picked it back up the sun was shining on one side of the square and it reflected as if metal. It was definitely a cube then.

The sun went in and when I looked again the object seemed to have split and then later once again and wasn’t as square ad before.

Actually after I took photos of it and enlarged the last picture, this going to sound odd but the shape reminded me the Nazi Die Glocke, the bell.

It was the same shape of that bell. All the time it hung there it didn’t go anywhere, it just stayed over the river and seemed to change shape by absorbing another object or just shape shifting.

I don’t know if it went back up into the dark cloud or disintegrate but my guess is the former.

I live in the capital too though so government experimental craft can’t be excluded either. You can see the video, which I have submitted to Mufon, registered under case 84990, of the strange cloud/object here: https://www.mufoncms.com/files_jeud8334j/84990_submitter_file1__20170516193712.mp4