The mysterious alien and UFO phenomena surrounding Mount Adams is well known whereby The Kenneth Arnold UFO sighting which occurred on June 24, 1947 was undoubtedly the most famous sighting so far. 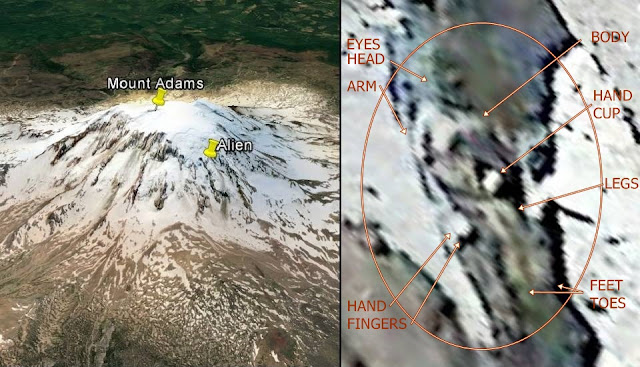 Now, a group of 150 people who attended a recent ECETI Ranch conference on June 30, 2017 say that they witnessed something very strange near the top of Mount.

Over the next four days it was photographed, video was shot and after analyzing the images and video they concluded that it was some sort of door that opened near the top of Mount Adams.

Rumors of some type of ‘alien hangar’ door on Mt. Adams have been around for over a decade and it is said that it is an opening which leads to a hangar inside the mountain for UFOs to enter and depart.

Wondering if there really would be such an opening/hangar I (UFO Sightings Hotspot) checked Mount Adams via Google Earth and although I could not find the opening/hangar, maybe covered by snow at the time they took the images, I found a giant frozen body in the snow near the top of Mount Adams.

At first glance it looks like a human body but upon further analysis it seems to be the body of an alien or human-like type humanoid, moreover the being is about 33-foot-tall.

Clearly visible: Head and big almond eyes, body, arms, fingers, legs, toes, with the being holding something in his left hand what looks like a cup. 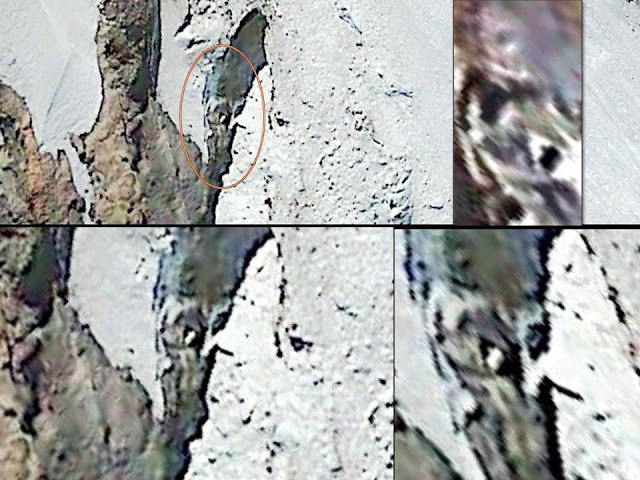 If this really is the body of a giant alien or humanoid then what about the rumors of a secret UFO base inside the mountain?

This video was shot during the ECETI event on June 30 showing the opening/alien hangar door near the top of Mount Adams.