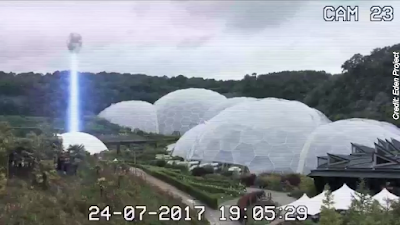 A bizarre, swarming UFO “appeared” in multiple places over the English coastal peninsula, but it’s not a sign of an impending alien invasion.

swarming formation hovering in the sky along with the hashtag #ufocornwall. But it wasn’t aliens. It was likely the work of the Eden Project.

The Eden Project is a series of massive greenhouses in Cornwall with connected transparent domes filled with exotic plants. It’s a visually stunning place and it’s about to launch a new attraction called Journey Into Space, which includes an Astronaut Academy, an astronomy photography exhibit and something called “Alien Encounter.”

The swarming UFO videos seem to have been orchestrated by the Eden Project as a publicity stunt tied into the alien-themed part of the experience.