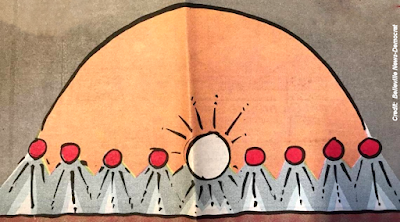 The three UFO sightings examined in this story occurred in Southern Illinois.

In a July 2017 interview, Melvern Noll described the object that he saw on January 5, 2000, in Highland. “I thought it was a bright star,” Noll said.

Then, it came down from the sky and Noll realized that it was something else. “To me, it looked like a two-story house. It was the size of a football field,” Noll said.

“It was two different floors. It had big windows — three on the lower deck and three on the top deck. Way up on top, there was like a penthouse with a dim light in it. Underneath, it had red lights in a diamond shape,” Noll said.

It flew very close to where Noll was standing. “If somebody had looked out one of the windows, I could have seen it,” Noll said. No one did.

Fireball Over Wisconsin and Illinois (Videos)