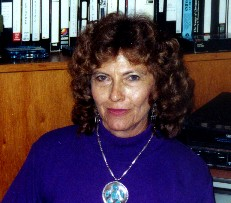 I first met Frankie Rowe about a quarter of a century ago when Don Schmitt and I had just finished a presentation in Roswell. She had been in the audience and afterward talked to us briefly. We would meet with her many times over the years as she told of her experiences back in July 1947.

There is no doubt that she had lived in Roswell at the time. Her father, Dan Dwyer, was a fire fighter, among other things. Frankie had told us that he had come home one day and told them about the crash and the creatures that he had seen. Dwyer died before any of us could interview him, but Frankie’s story was not stand alone. Frankie’s sister, Helen Cahill and former fire fighter J. C. Smith both said they had heard the story from Dwyer. Smith said that Dwyer had driven out to the crash site in his car rather than in equipment from the fire department.

Frankie said that she had been in Roswell and while at the fire department sometime later, a state trooper had stopped by. He said that he had a piece of the debris. Frankie described it as light weight and that it flowed like quicksilver.

Over the years she added few details telling us about a visit from a military officer ordering her to keep the tale to herself. Originally, she just said that the officer had told her that if she ever mentioned the story her mother and father would end up in Orchard Park, which had been a POW camp during the Second World War. Later it would seem the threats had been more violent and more direct.

One day she called me in a panic because she had had the telephone company out to repair her telephone. The man found what he thought to be a tap on her phone and Frankie was sure that the government was watching her now that she had told us about her experiences. We talked for about two hours. I don’t know if her phone had actually been tapped or if the repairman had misinterpreted something on the line. Whatever it was, Frankie was convinced that she was being monitored by the government.

I found her to be a kind lady who had an extraordinary experience. I don’t believe I ever heard her say anything negative about anyone, though in the Roswell case accusations were often thrown around. Once she had told us, that is Don and me, the full tale, she didn’t change the story. It had taken a while for her to trust us, but once she did, she confided in us and looked to us for help.

I last saw her a number of years ago at one of the more recent Roswell festivals. She was living in Roswell at the time and we had a nice chat. Later she would move to Breckenridge, Texas, where she died on July 28. She was 84.

Roswell Firemen and the Double Standard