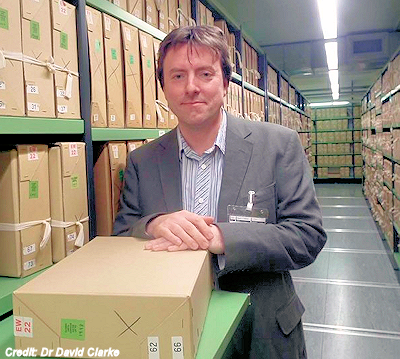 The memo – once classified ‘Secret UK Eyes Only’ – was written in August 2000 by a desk officer in the MoD’s secret-squirrel space intelligence unit, DI55. It was addressed to MoD Security

At the time DI55 was in a spin because a series of UFO report files had disappeared from its archives.

This came to light soon after one of its contractors (who has never been named) had completed his work on the infamous Condign Report on ‘Unidentified Aerial Phenomena’.

As the spooks rooted through their filing cabinets a letter arrived from me, addressed to
the MoD records officer at New Scotland Yard. At the time I had given up a job as a vacuum cleaner salesman and was working as a journalist, looking for a scoop.

Tony Blair’s government had introduced a Freedom of Information Act (FOIA) but it was still five years from implementation.

So it was that I spent many hours working through UFO records at the National Archives in Kew and came across references to the mysterious DI55.

They were a branch of the Defence Intelligence Staff who, since 1967, had been the government agency responsible for the investigation of UFO incidents that might have some bearing on the defence of the realm.

UFO sighting reports were not usually subject to secrecy. But DI55 were also involved in top secret studies of aerodynamic missiles and satellites, so their very existence – and their interest in UFOs – was secret until quite recently.

If the truth really was out there – as The X-Files proclaimed – then I suspected DI55 would know all about it.

Indeed, in one of their recently declassified files, a desk officer refers approvingly to a Sunday People headline that describes them as ‘Our Secret Army Against the Aliens’.

My letter, dated 21 July 2000, requested access to their surviving records under the Code of Practice (a precursor to FOIA). It arrived in exactly the same month that someone in DIS realised a number of these files had gone missing.

This odd coincidence appears to have set alarm bells ringing in the intelligence agencies.

‘Dr Clarke is clearly well directed towards the documents he sees as relevant,’ the desk officer wrote to his security minders. This led him to be ‘suspicious’ especially as these files contained ‘very sensitive data’.

Why was I was interested in files only they knew were missing?

And who had informed me they were ‘missing’?

The memo implies that I may have been tipped off by someone in the Defence Intelligence Staff – perhaps even the author of the Condign study – who was aware of what the files contained, and had expressed an interest in them before. It continued:

‘Pending the publication of [the Condign report] on this subject DIST is very sensitive to the potential mischief that unauthorised use of the information contained in these files may cause if used to support uninformed Press and private publications on UAPs’.

MoD Security were then ordered to find the missing files urgently. They were also tasked to find out more about ‘Dr Clarke and his sponsors’ and any potential sources I might have in the intelligence community.

Quite what this investigation turned up remains a mystery – because the relevant papers are, you will not be surprised to hear, missing from the file.

But I can reveal that Our Man in Sheffield must have passed whatever security vetting was deemed appropriate by Her Majesty’s Secret Service.

The ‘missing files’ were found, and can now be downloaded by anyone – with or without security clearance – for a small charge from The National Archives website.

And in May 2006 I was invited to MoD Main Building to receive a first-generation copy of DI55’s once secret final report on UFOs – or UAPs, as they preferred to call them.

Secret no more. My job was done.

I eventually discovered the ‘truth’ about what DI55 knew about UFOs. It was hidden in plain sight in one of their own documents from 1995, released by The National Archives in 2017. Sent to the MoD’s UFO desk and signed off by a DI55 Wing Commander it says:

‘I see no reason for continuing to deny that [Defence Intelligence] has an interest in UFOs. However, if the association is formally made public, then the MoD will no doubt be pressurised to state what the intelligence role/interest is. This could lead to disbelief and embarrassment since few people are likely to believe the truth that lack of funds and higher priorities have prevented any study of the thousands of reports received’.

UFOs, THE MoD AND ME

The Inconvenient Truth is Out There…