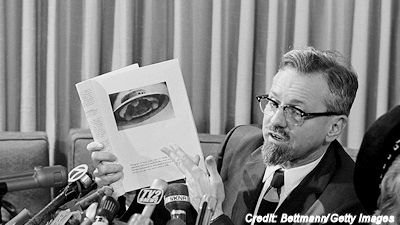 Granted, while Kaplan mentions the investigative efforts of astronomer Dr. J. Allen Hynek—whose initial skepticism about UFOs was eventually discarded, after he analyzed a number of genuinely inexplicable sighting reports compiled by the U.S. Air Force during the 1960s—she devotes most of her article to touting the demonstrably uninformed utterances of UFO skeptics such as physicist Enrico Fermi and SETI specialist Jill Tartar.

Perhaps most telling, Kaplan completely ignores (or is unaware of) the published remarks of the late Dr. James McDonald, one of only a handful of physicists who actually engaged in UFO research, who wrote,

“From time to time in the history of science, situations have arisen in which a problem of ultimately enormous importance went begging for adequate attention simply because that problem appeared to involve phenomena so far outside the current bounds of scientific knowledge that it was not even regarded as a legitimate subject of serious scientific concern. That is precisely the situation in which the UFO problem now lies. One of the principal results of my own recent intensive study of the UFO enigma is this: I have become convinced that the scientific community, not only in this country but throughout the world, has been casually ignoring as nonsense a matter of extraordinary scientific importance.”1

McDonald was especially unhappy with the initial skepticism exhibited by Dr. Hynek during his tenure as scientific consultant to the USAF’s chief UFO project, Blue Book. After personally reviewing a large quantity of UFO reports held by the U.S. Air Force at Wright-Patterson AFB, McDonald wrote, “…There are hundreds of good cases in the Air Force files that should have led to top-level scientific scrutiny of [UFOs] years ago, yet these cases have been swept under the rug in a most disturbing way by Project Blue Book investigators and their consultants.”2

Despite, or perhaps because of, the Air Force’s ongoing attempts to suppress the frequently high-quality data on UFOs it collected, McDonald began to investigate the phenomenon on his own time and at his own expense, while ignoring the very real risk to his scientific reputation.

This diligence paid off and, by 1968, McDonald was widely regarded—although not among his still-dubious peers—as one of the world’s leading scientific experts on UFOs. Consequently, he was invited to address the United States Congress on the subject, during hearings held that year. McDonald’s full statement before the House Committee on Science and Astronautics, presented on July 29th, may be found in the U.S. Congressional Record, as well as on the Internet.3

While acknowledging that the overwhelming majority of UFO sightings undoubtedly had prosaic explanations, and that a great many questions about the phenomenon remained unanswered, McDonald succinctly summarized his conclusions regarding the most credible of the unexplained cases: “My own present opinion, based on two years of careful study, is that UFOs are probably extraterrestrial devices engaged in something that might very tentatively be termed ‘surveillance.’” 4

Although this was merely an opinion, it was after all an informed opinion on UFOs, something very few other scientists could offer, then or now. Many of McDonald’s published papers, private research notes, and personal letters relating to his investigations of the UFO phenomenon are now accessible at the University of Arizona, providing insight into the cautious reasoning underlying his dramatic conclusions.

While most scientists (and science writers) are quick to dismiss as impossible the idea that UFOs are alien spacecraft, very few of them will ever make the effort to learn whether any evidence exists to suggest otherwise. Instead, they merely continue to assert that, as an idea, it simply does not work.

This self-created impasse was mentioned by McDonald in his oral statement to Congress: “We have tended to ignore [the UFO phenomenon] because we didn’t think it made sense. It definitely defies any explanation, and hence the situation has evolved where we can’t get going because we aren’t already going. The scientific community as a whole won’t take this problem seriously because it doesn’t have scientific data. They want instrumental data. Why don’t they have instrumental data? Because the scientists don’t take it seriously enough to get the scientific data. It is like the 20-year-old who can’t get a job because he lacks experience, and he lacks experience because he hasn’t had a job. In the same way you find the scientist wishing you would give him good hard meter readings and magnetometer traces, and so on. But we don’t have [those data] yet because the collective body of scientists, including myself, have ignored UFOs.” 5

In other words, most scientists reject outright the validity of UFO research, refuse to engage in it, and deliberately ignore the intriguing data compiled by a handful of their more inquisitive, less-biased peers. If this were not enough, despite their profound unfamiliarity with the subject, many of these same intransigent individuals preach about UFOs in the most shameless and presumptuous manner. If they were to apply this same “methodology” to their own research, their colleagues might justifiably consider their conduct incompetent, if not fraudulent. Nevertheless, it is rare to hear a scientist speak knowledgeably about the UFO phenomenon and rarer still to find one who has actually studied it.

The Never-Ending Search for UFOs and Extraterrestrial Intelligence